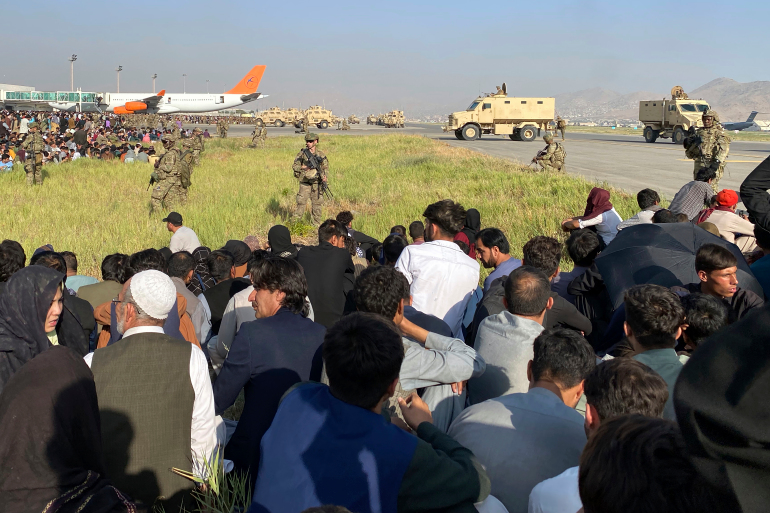 Chaos at Kabul Airport as thousands scream for help to escape from the Taliban, who now control the capital and most of Afghanistan.

Thousands of Afghans rushed into Kabul’s main airport on Monday, August 16, and the vast majority still remain there today, Wednesday, August 18. Some were so desperate to escape the Taliban that they held onto a military jet as it took off (see pic below), plunging to their deaths.

U.S. officials reported that at least seven people died in the chaos, as America’s longest war ended with its enemy the victor, bringing back memories of the Vietnam conflict.

Approximately 800 NATO civilians are in place at the Kabul airport, assisting with air traffic control, refuelling, and communications.

The crowds came while the Taliban enforced their rule over the capital of 5 million people after a lightning advance across the country that took just over a week to dethrone the country’s Western-backed government. There were no major reports of abuses or fighting, but many residents stayed home and remained fearful after the insurgents’ takeover saw prisons emptied and armouries looted.

A resolute U.S. President Joe Biden said he stood “squarely behind” his decision to withdraw American forces and acknowledged the “gut-wrenching” images unfolding in Kabul. Biden said he faced a choice between honouring a previously negotiated withdrawal agreement or sending thousands of more troops back to begin the third decade of war.

“After 20 years, I’ve learned the hard way that there was never a good time to withdraw U.S. forces,” Biden said in a televised address from the White House.

Boris Johnson insisted today that the UK’s ‘core mission’ in Afghanistan had ‘succeeded’ and swiped at Joe Biden today as he faced the wrath of the House of Commons over the military meltdown.

As the desperate evacuation effort continues in Kabul, the PM addressed the House of Commons to defend the handling of the crisis.

NATO allies around Europe and beyond are in the process of deploying military aircraft to Afghanistan in ongoing efforts to pull its citizens, and vulnerable Afghans, out of the country as the Taliban assumed control of the nation after two decades of what some say was a ‘worthless war’.

The alliance is said to be working around the clock to help coordinate air assets that can complete evacuations from Kabul “as soon as possible,” Secretary-General Jens Stoltenberg told reporters during a Tuesday virtual press conference.

“NATO’s focus right now is to ensure the safe departure of personnel from allied and partner countries, and all of the Afghans who have helped us,” he added.

Since the weekend, NATO allies have continuously sent more and more aircraft to Kabul and other areas of Afghanistan to support the evacuation efforts. Stoltenberg noted that following a Tuesday meeting among NATO members, several more allies just committed to sending aircraft to the region to help build the air bridge that will transport personnel and allied Afghans out of harm’s way.