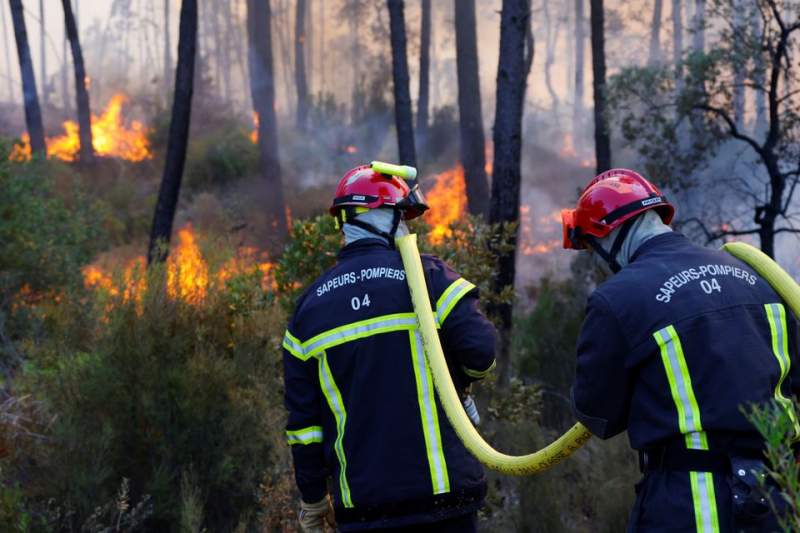 Wildfires near the French resort of Saint-Tropez has killed two people as thousands flee the riviera.

A wildfire that continues to burn in the hills behind the French Riviera resort of Saint-Tropez has killed at least two people, local authorities reported today, Wednesday, August 18.

Some 1,100 firefighters, as well as water-bombing aircraft, have been fighting the blaze that since Monday has scorched more than 7,000 hectares of land, forcing the evacuation of several thousand people from their homes and campsites.

Firefighters have so far been unable to contain the blaze as a strong ‘mistral’ wind fans the flames across a tinderbox dry landscape which has helped spark new blazes on several flanks today.

Holidaymakers on the Mediterranean coast watched on with surprise followed by horror from their sun-loungers and paddleboards as thick plumes of smoke blew across the sky. Police had to shut down one stretch of motorway due to poor visibility.

According to reports, this latest blaze broke out in the Plaine de Maures nature reserve, located some 50 km from Saint-Tropez. The fire has so far swept through half of the reserve, causing an irreversible loss to biodiversity, junior government minister Berangere Abba said.

“We have some hope conditions will ease tonight, but there are no guarantees,” local prefect Evence Richard told a news conference.

“Two people had been killed and 24 hurt, among them five firemen,” he said, adding that it was still too early for those evacuated to return home or to their holiday lodgings.

President Emmanuel Macron on Tuesday left his nearby summer retreat to thank the firefighters for their efforts.

Waves of extreme heat have hit much of the Mediterranean region in recent weeks, with wildfires in Spain, Greece and Turkey raising uncomfortable questions over global warming and countries’ preparedness