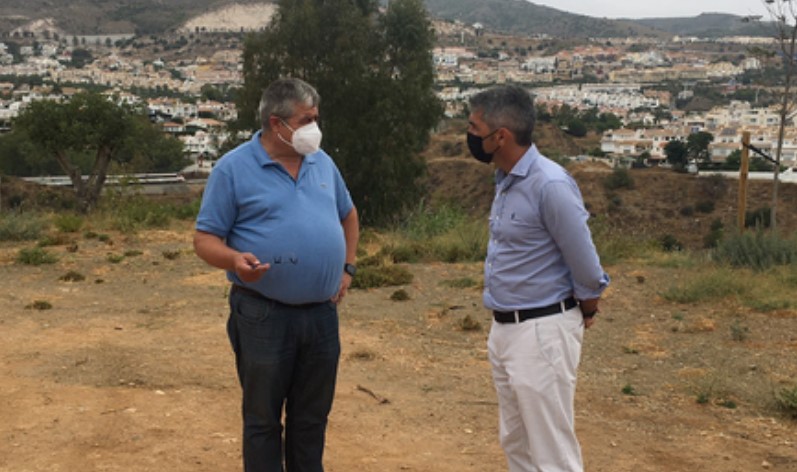 Victor Navas, the mayor of Benalmadena, announced on Thursday, August 19, that the tenders had gone out for the €12 million initiative to develop the Albaytar park project, now that work to channel the Pantano stream had been taken care of, with the aim of creating a large green zone for the town.
Mr Navas visited the site of the future Albaytar park, accompanied by Joaquin Villazon, the Councillor for Parks and Gardens, where the mayor said, “The future Albaytar park is one of the most important projects in which we are working from the town council, which has not worked and progressed so much in its development as in recent years, thanks to the stability provided by this government team.
“Visitors to the grounds of the future park will see that there is a fenced-off area in the vicinity of the Pantano stream, to avoid danger to passers-by, and once we finish the embankment, whose works will now go out to tender, we will reopen this space to the public, so that the whole area can be visited”, he explained.
“At the same time, we are working on the drafting of the two projects with which we will progress in the development of the Albaytar park during 2022: we would like to undertake the project in one attempt, and not in phases, but its size and high cost – estimated at about €12 million – prevent it from being a project that can be done in a single legislature, and with a single phase,” Navas clarified.
The mayor also pointed out that, “if a few days ago we spoke that the development of the ‘tree management plan’ has shown that Benalmadena is one of the towns with the largest tree area in Spain – being proportionally higher than that of Madrid, Barcelona, Sevilla or London – now we also want it to be one of the municipalities with more square metres of green areas per citizen, a goal that we will achieve when the Albaytar park is fully developed”.
Adding, “When raising a green and sustainable town, friendly to its citizens, and concerned about their welfare, we have to work and think long-sightedly, determining ways to improve the quality of life for residents and visitors”.
Joaquin Villazon, explained that the Consistory has just “put out to tender the drafting of the projects of phase 1 and 2 of the park, and at the same time we have also initiated the tender for the project and the work for an amount of about €645,000, with a completion time of about three months, to finish the channeling of the Pantano stream. Once we award the works, we will finish the channeling up to the Racquet Club, so that all the land of the park is usable”, as reported by malagahoy.es.