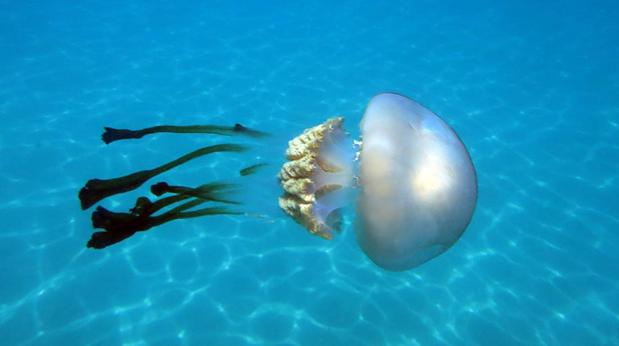 Giant stinging jellyfish swarm the beaches of Malaga
An increased presence of the jellyfish has been reported over the last few days at the beaches in and surrounding the province of Malaga, on the southern coast of Spain’s Costa del Sol.
Experts from the Aula del Mar marine conservation organisation in Malaga had already said to expect that the summer was going to be “complicated” in terms of the presence of jellyfish on the Costa del Sol.


“This year we were sure that there were going to be a series of conditions that would favour a high presence, as has finally happened this week,” biologist Jesús Bellido said after the group registered high numbers of the creatures along the entire Malaga coastline.
“However, there is a slight relief as it started in mid-August and has not affected the month of July,” added Bellido.

The Aula del Mar team recorded a high presence of jellyfish in Benalmadena, Fuengirola and Marbella after a similar problem occurred on Nerja’s beaches the day before.

“Now the sea seems to be cold but before the summer it was much warmer. There were a series of ideal conditions to create a high presence of jellyfish in the Alboran Sea,” after blaming the climatic factors in spring.

A mixture of species
According to Aula del Mar, the main species observed on the coast are the Pelagia noctiluca, which is predominant in the western stretch, and the Rhizostoma luteum species that continue to flood the beaches between Malaga and the Axarquia coast.

The Infomedusa app, which monitors the jellyfish situation along the whole of the Costa de Sol, has been developed by the Aula del Mar with the collaboration of Malaga’s provincial council, it is worth downloading to check the presence of jellyfish before you enter the water with children.
Are jellyfish stings dangerous?
Jellyfish stings vary greatly in severity. Most often they result in immediate pain and red, irritated marks on the skin. Some jellyfish stings may cause more whole-body (systemic) illness but only in very rare cases are jellyfish stings life-threatening.