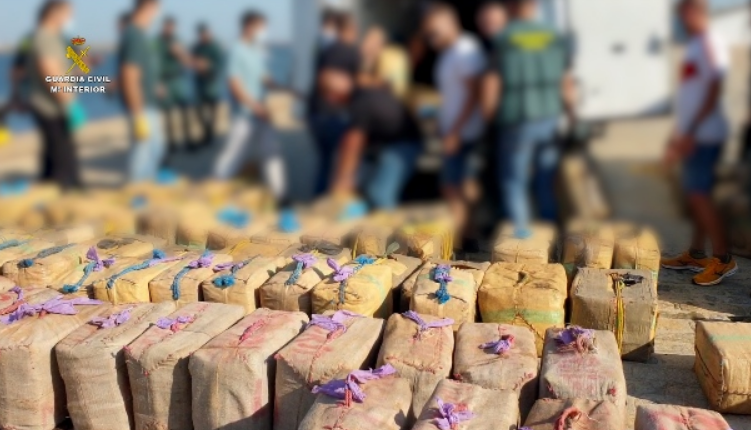 The Guardia Civil, in the FILHO operation, has arrested the two crew members of a fishing boat in Huelva when they were transporting four tons of hashish.

The investigation began when it became known that a fishing boat, of Galician origin but that was moored in the fishing port of Isla Cristina, would go off the coast of Morocco to load hashish and later introduce it into Spain.

Behind the boat, the officers carried out a discreet surveillance of the fishing vessel, and on July 22 they saw it set sail from Isla Cristina with two crew members.

For this reason, an operation was organised to intercept the aforementioned vessel in which members of the Rapid Action Group (GAR), the Huelva Provincial Maritime Service and the Maritime Surveillance Coordination Center (CECORVIGMAR) participated.

Once the Guardia Civil had evidence that the hashish has been shipped on board, the officers stopped the boat 130 miles off the coast of Huelva and verified that the ship’s hold was full of bales of hashish with two crew members aboard.

The investigation has been carried out by officers belonging to OCON-SUR and the EDOA of the Huelva Command.

Earlier this month, The Guardia Civil and Agencia Tributaria, in cooperation with the Portuguese Judicial Police have dismantled an organised crime network involved in large-scale drugs trafficking, arresting eight of its members. The criminals were about to smuggle 15 tons of hashish into Spain when they were arrested.

The investigation began at the end of last year after the Spanish investigators uncovered an organised crime group smuggling hashish from Morroco to Spain using different types of vessels. Europol’s European Financial and Economic Crime Centre (EFECC) assisted with the analysis of the criminals’ financial transactions, mapping out the full network spread out across Spain and Portugal.