World’s smallest international bridge is between Spain and Portugal 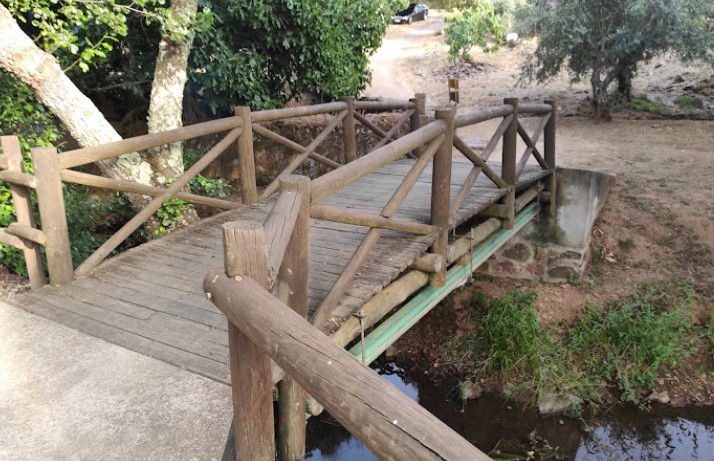 THE smallest international bridge in the world is the El Marco bridge which is 3.2 metres long and connects Spain with Portugal

There is a bridge that connects the two countries of Spain and Portugal, which is the smallest construction of its type anywhere in the world between two international boundaries, spanning just 3.2 metres, joining the province of Badajoz on the Spanish side, with Arronches, in Portugal.

This incredible feature, which is also only 1.45 metres wide, is so short that an athletic person could probably just as easily jump across the short distance from country to country, and it goes without saying that no traffic can cross the bridge, although motorbikes, bicycles, pedestrians, and I guess, the occasional animal, do cross it regularly.

The crossing is a viaduct, and goes over the narrow Abrilongo stream, which is a tributary of the Gevora River, and is known as the El Marco bridge, officially connecting the Spanish municipality of La Codosera – which is in the Extremaduran province of Badajoz – with the Portuguese municipality of Arronches, in the district of Portalegre – just 3.2 metres away.

Today’s bridge is a newer design than that first constructed hundreds of years ago, which locals say was originally just some planks of wood, which were easily washed away when the river flooded, although, remarkably, the new version of the world’s smallest bridge was only completed in 2008, after the residents of Arronches decided it was time a bridge was constructed that could serve its purpose for a long time to come.

It was paid for by European funds, but it was workers from each side of the river who carried out the reinforced construction, putting in place the historic smallest international bridge in the world, which even when the river floods, will never get washed away, and to avoid any confusion to travellers, there is a stone on either side of the world’s smallest bridge, with ‘S’ for Spain, and ‘P’ for Portugal, just in case they got disorientated with the long-distance crossing!