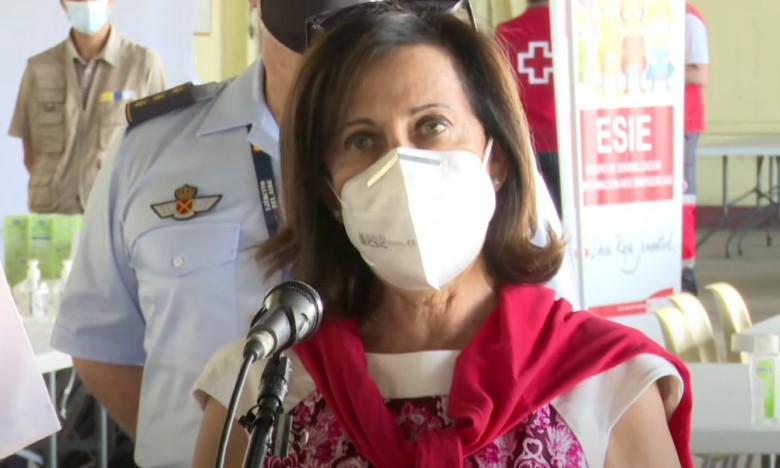 Margarita Robles insists Spain will bring in as many Afghans as possible. image: twitter

Margarita Robles, the Spanish the Minister of Defence, has insisted today, Monday, August 23, that the Government intends to remove as many people as possible from Afghanistan, for as long as possible, although she insisted that this does not depend on them, but on the situation on the ground in Kabul, and in particular on the deadline set by the United States for the departure of its troops.
Ms Robles made this announcement during her visit to the headquarters of the Military Emergency Unit (UME), at the Torrejon de Ardoz Air Base in Madrid, where the Afghans being evacuated from Kabul are being received, and where this evening, another 260 people will arrive on board an A400M Spanish Army aircraft.
In a press conference, the minister said, “We will bring in the Afghans we can for as long as we can”, without commenting further on the warning of possible “consequences” issued by the Taliban after Washington hinted that it might not meet the deadline and keep its troops deployed at the airport beyond August 31.
Faced with criticism of the government from the opposition, Robles has claimed that “we should all do what we can, to organise an operation as important as the evacuation of people from Kabul. That is the only thing we have to care about, that people can leave. This example is the best image of what Spain is, just as our Armed Forces are doing a magnificent job”.
Finally, Robles avoided offering more details about the Army’s special operations team sent to the Asian country, appealing to prudence and discretion in the current circumstances since, “Their lives are at stake. The Army has sent what it considers necessary”, is all she would comment, as reported by malagahoy.es.