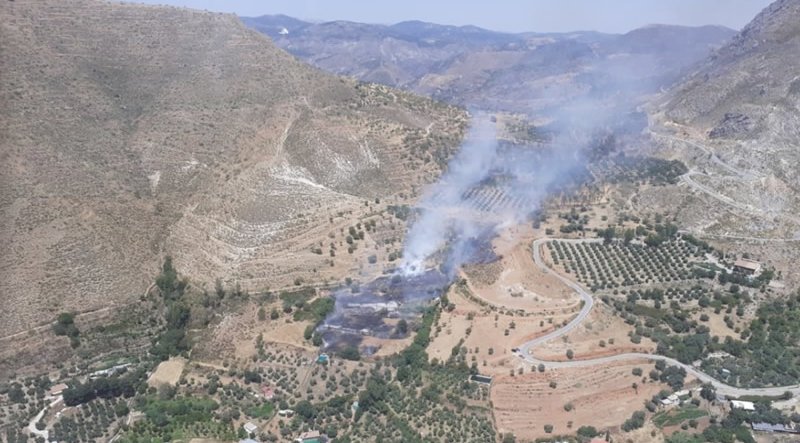 So far this Summer, there have been a total of four fires that have occurred in the Granada municipality of Guejar Sierra, the last one declared as breaking out at around 4.12pm this Monday, August 23, with Infoca still investigating the causes of each fire, not ruling out that they could have been caused intentionally.
Municipal sources explained to GranadaDigital that “temperatures influence a lot”, plus the fact that during this hot weather “the ground is quite dry, and temperatures are very high”, and also, in the areas where the fires broke out, “there are strong currents of air”, which allows the fire to spread quickly.
Guejar Sierra is located on one side of the Genil valley that has very high slopes, and little space, which is ideal territory that favours the rapid advance of any fire, with municipal sources commenting on the fire last week in Carril de La Argumosa, “in less than five minutes the fire spread 100 metres”.
Spanish municipalities are very lucky to have Infoca, an entity that reacts so quickly, especially concerning one that happened in the Camino del Castañal, as a municipal source said, “There was no other big fire and they were able to come with four helicopters, and two airplanes, and then it was extinguished fairly soon”.
The problem is that to this day the causes of the fires are not officially known yet, “You can assume when it is on a farm that is private, or next to a road, but you can not be sure until Infoca knows the origin”, clarify municipal sources, and it is true that there have been many fires in a short space of time, but for now, it can only be assumed, as reported by granadadigital.es.