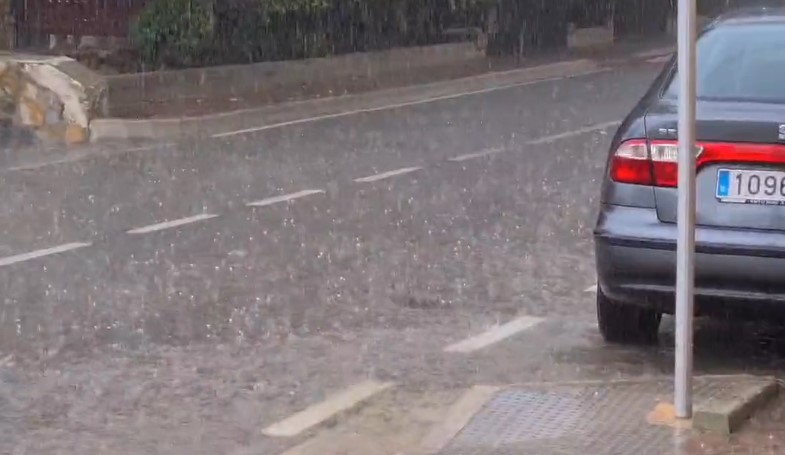 HEAVY storms hit the Valencian Community during Thursday, August 26, with hailstones and lightning in some areas

The Valencian Community is enduring a pretty stormy end to the month of August, with turbulent weather ensuing, as today, Thursday, August 26 saw heavy storms hit the northern interior of the provinces of Castellon and Alicante, with heavy rains and hail in many towns.
According to Aemet reports, hailstones of up to 2cm in diameter have fallen in the Comtat region, where and an estimated 11 litres per square metre has fallen until around 5pm in Muro, with 13 litres per square metre in Confrides, and 14.6 in Millena, according to the network of rain gauges of the Jucar Hydrographic Confederation.
The Almudaina observer reported rains of 29.4  litres per square metre in one 15 minute spell with some hailstones as well, but the heaviest storms occurred in the mountain areas of Castellon, near Penyagolosa, and in the southern interior of the province, where, in the mountain areas of l’Alt Palància, on the border with the province of Valencia, there were reports of incredible lighting storms, while in between Requena and Siete Aguas and near to Rincon de Ademuz, there were also very heavy storms.
Today’s situation contrasts greatly with the yellow warning for high temperatures that Aemet has activated in the Valencian Community for tomorrow, Friday, August 27, where temperatures are predicted to rise as high as 40ºC in some parts of the interior, though, despite this increase in heat, the storms will continue in the early hours of the evening in the northern half of the region, and between Sunday and next Tuesday, August 31, they are expected to affect a large part of the Region, both in coastal areas and in all inland regions, as reported by lasprovincias.es.