We all know how it ended. THIS IS HOW IT STARTED. 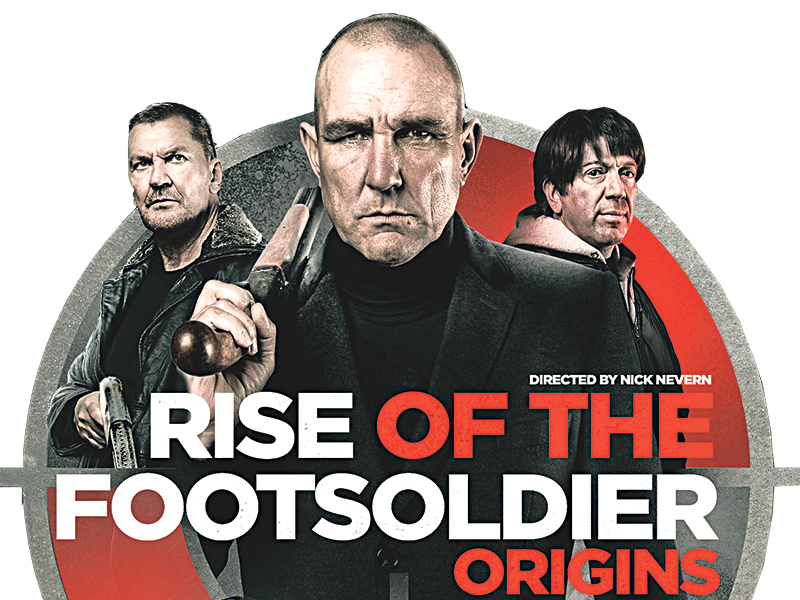 RISE OF THE FOOTSOLDIER: ORIGINS. Only in cinemas September 3. Courtesy of Signature Entertainment.

Lock, Stock and Snatch superstar Vinnie Jones teams up with premiere acting veteran Keith Allen (Kingsman, Shallow Grave) for British true crime thriller RISE OF THE FOOTSOLDIER: ORIGINS, a brutal account of how real-life, hard-as-nails Falklands War veteran Tony Tucker came to be involved in one of the most notorious gangland murders in British history.

As well as Jones, outstanding as fearsome doorman Bernard O’Mahoney, and Allen as formidable nightclub owner Dave Simms, the film features some of the cream of the crop of home-grown actors including Craig Fairbrass (Muscle) – returning as notorious drug-dealer Pat Tate, Terry Stone (Rise Of The Footsoldier franchise) also returns as Tony Tucker, PH Moriarty from The Long Good Friday, Billy Murray (Eastenders), Michelle Collins (Eastenders), George Russo (Top Dog), the brilliant Roland Manookian (RocknRolla), and genius cameos from reality TV royalty Chris Hughes and the late and great Heavy D.  Directed by Nick Nevern (director and star of The Hooligan Factory and star of popular BBC comedy series Motherland), who co-wrote the script with producer Andrew Loveday, this is a blisteringly good thriller, set against a superbly realised backdrop of the late 80s rave scene, with a pulsing soundtrack featuring the likes of New Order and Ultravox.

A future Brit gangster classic that gives the likes of Layer Cake, The Gentlemen and Legend a run for their money.  Jam-packed with foul-mouthed and often hilarious dialogue, explosive moments of violence, and a gripping plot that tells it like it happened, Rise of the Footsoldier: Origins is a must-see for anyone after an authentic crime biopic that hits like a knuckle-duster polished to a high shine. This is Blow, Essex style, and it will knock your socks off. Get your tickets front and centre now and prepare to get blasted.

Synopsis: When a down-on-his-luck Tony Tucker lands a job as a nightclub doorman after saving the owner’s grandson, he will do whatever it takes to rise to the top of the game. Teaming up with Essex heavyweight Bernard O’Mahoney at the height of the 1980’s rave scene, Tucker could do no wrong.

A voracious appetite for money, drugs, and a glamorous lifestyle soon develops, fueling his growingly audacious ventures and seeing him join forces with Pat Tate and Craig Rolfe to capitalise on the drug-boom. Packed with fights, revenges, and explosions, the ultimate origin story brings Rise of the Footsoldier full circle, and tackles many of the franchise’s previously unanswered questions.