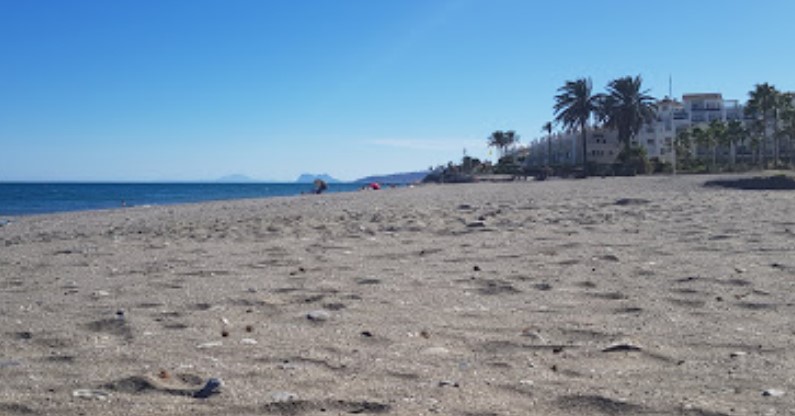 Residents of the Costa Natura nudist complex in the Malaga municipality of Estepona – one of the pioneers of nude bathing in Spain – are at loggerheads with the owners of the recently opened Nido beach bar, after it started placing numerous hammocks on the beach which take up an extensive area of sand, as well as requiring its customers to wear clothes.
According to Almudena Medrano – a lawyer who is a resident in Costa Natura, but has been visiting for 18 years, and who spoke with Cadena Ser on Thursday, August 26 about the problem – the beach bar opened in mid-July, and subsequently started to place hammocks on the sand for its customers, which the management of the nudist complex believe to be an invasion of the space that is available.
Ms Medrano pointed out that there had never been any problems with the use of this Estepona beach for nudists, but that as soon as the beach bar opened, the problems began, “A neighbour of the residential complex went to purchase something and they told him that he couldn’t enter without clothes. They threw him out of an area that is a public beach, and they have appropriated part of the promenade”.
The argument seems to be that Costa Natura residents believe the beach bar is occupying a disproportionate part of the sand, “We already started from a disadvantageous situation. We just want to continue using the beach as before, and exercise our right to bathe as we want. The hammocks only leave minimal space. In fact, when the tide rises there is hardly any beach left, and of the 400 metres of Costa Natura beach, the beach bar occupies almost half”.
Speaking with El Pais, the owner of the beach bar told them he does not care about naturism, “Our concept is not that and here they must respect it. What cannot be is that they provoke us. There are those who have been inches from our concession, and others enter the establishment naked when there are families”.
Almudena says this is false, “We don’t want to disturb the beach bar. But one of their arguments is that they don’t want to see naked bodies. I invite people to see their social networks to see that sexualised women appear. I don’t know which is worse, that, or seeing people with naked bodies in a natural way”.
It has apparently reached a stalemate between the two parties now, with Almudena explaining, “We have tried to communicate with them, but they have not wanted to tell us anything”, and says that really, what would help is the installation of a sigh which informs people that it is a nudist beach, assuring, “With this, we do not want to exclude anyone, we only want to avoid problems. It would be something of an informative nature, but the town council is not facilitating it”, as reported by cadenaser.com.