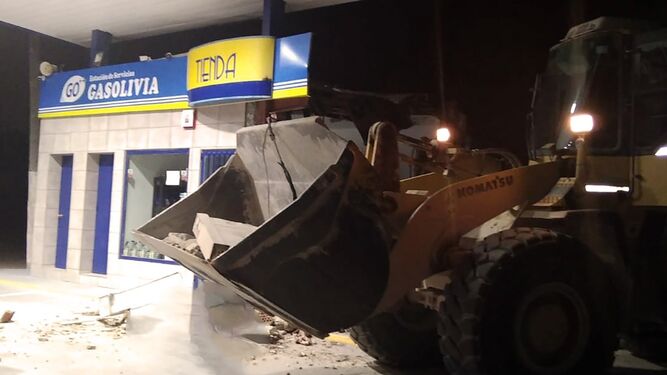 Robbers partially destroy petrol station with a JCB but flee without the cash. image: Twitter

Robbers partially destroy a petrol station in the municipality of Alcalá with a JCB, but flee empty-handed due to swift police action.

A gang of thieves partially destroyed a gas station with a stolen JCB while trying to steal the contents of the safe inside the store.

The criminals fled without being able to take any cash since the Police were alerted by an alarm signal and deployed immediately.

However, luckily for them, the thieves managed to flee just before the patrol arrived. The events occurred at dawn last Wednesday, August 18, at a service station located on the A-398 highway, which connects Alcalá de Guadaíra and Mairena del Alcor. The fuel station is located in the municipality of Alcalá, Madrid.

At around 3:15 am in the morning, several people arrived at the gas station, which was closed to the public at that time, in a vehicle.

Their heads were covered with caps and their faces were covered by masks. Leaving the car parked nearby, they started the JCB and then attempted to smash down one of the walls of the station.

However, as the alarms were triggered when the wall collapsed, the thieves realised that the police would be on their way and left empty-handed.

The robbery attempt lasted less than five minutes in total. Of course, they caused serious damage to the gas station. When the police arrived, they found the abandoned excavator next to the building they tried to demolish.

Officers from the Alcalá de Guadaíra police station have opened an investigation to try to identify the perpetrators. At the moment, police have no suspects related to these events. The video surveillance cameras are being checked and a forensic inspection has been carried out for fingerprints.