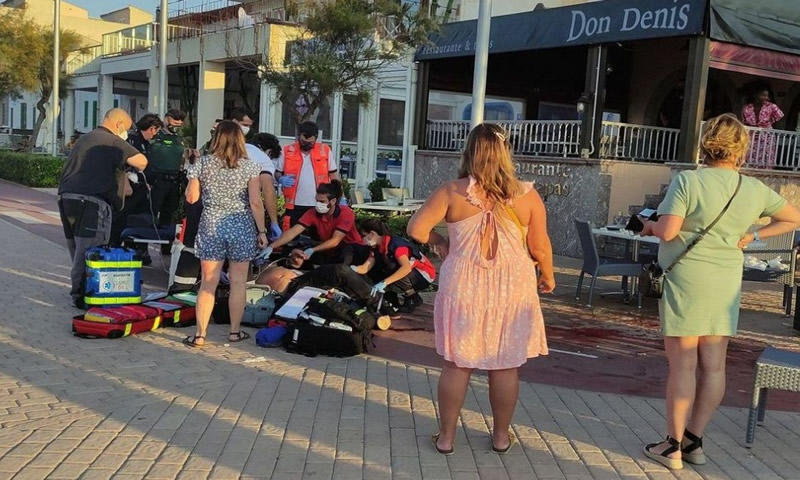 British tourist fighting for his life a week after being stabbed in a Mallorca restaurant.

AN ARGUMENT in a restaurant in Can Picafort, Mallorca, ended with a British customer and a waiter stabbing one another, with the Brit seriously injured

In an incident that occurred on Thursday, August 26, at a restaurant in the Mallorcan resort of Can Picafort, a waiter and a client got into a heated discussion over the bill, which resulted in both men stabbing one another, with the tourist having to be transferred to a hospital in a very serious condition, while the waiter suffered minor injuries.
According to police sources on the Balearic island, the incident occurred at around 7.30pm in the evening, on the terrace of a restaurant located on Calle Enginyer Felicia Fuster, next to the Can Picafort Yacht Club, where it would seem that a British tourist aged around 45 started protesting loudly at the total on his bill, saying that he had not enjoyed the meal.
He then became involved in a heated argument with one of the waiters at the establishment, in his 60s, and a fight broke out, during which the customer allegedly picked up a knife and attacked the waiter, injuring him on his arm and hand, with the waiter then reportedly stabbing the British man at least twice in his abdomen and leg.
Patrols from the Santa Margalida Local Police and the Guardia Civil were alerted, who were immediately mobilised to the restaurant, along with several ambulances, with medics and police officers providing first aid to both men, but it was clear that the customer was losing a lot of blood so he was evacuated to the Son Espases hospital, while the waiter was treated at the Muro hospital.
Guardia Civil and Local Police officers from Santa Margalida carried out various steps to fully clarify what had happened, with officers interviewing several witnesses to the attack and were waiting to take a statement from the two implicated, added the same sources, as reported by elperiodico.com.