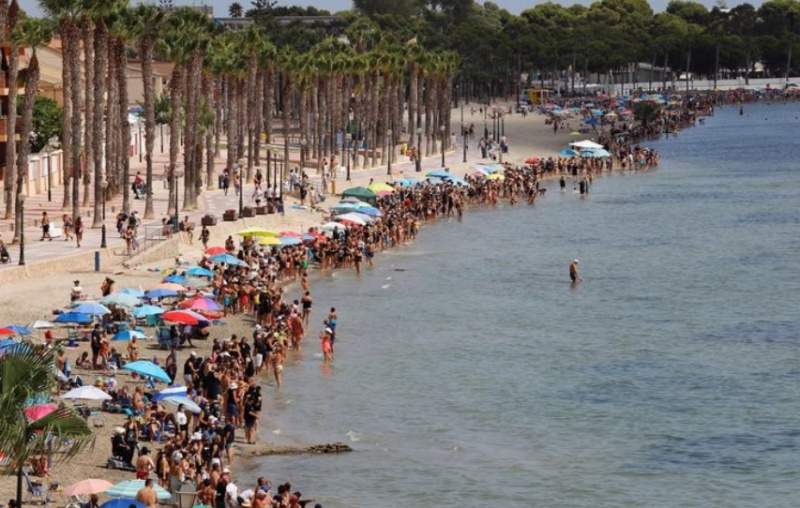 An incredible 70,000 people gathered this morning to make a human chain that spanned 73 kilometres of the coast of the Mar Menor in protest against an environmental disaster that has been reoccurring for years.

Mar Menor is a coastal saltwater lagoon located south-east of the Autonomous Community of Murcia, Spain, near Cartagena.

A new crisis has emerged in recent days that has caused the death of thousands of fish due to a lack of oxygen.

Between this week and last week, between four and five tons of dead rotting fish have been collected, their demise is being blamed on a large amount of nitrates, phosphates, and ammonium that reach the 170-square-kilometre saltwater lagoon, especially from fertilisers that are widely used in the agricultural area of the basin- all of the waste products flow freely into the Mar Menor.

Protesters began arriving at the beaches early in the morning holding placards displaying the slogan: ‘Let’s embrace the Mar Menor’.

“It is a way of saying goodbye with dignity to so many animals that have died because of human greed,” Jesús Cutillas, spokesman for the coordination group Abracemos el Mar Menor, told Europa Press.

Thousands of people gathered observed a minute of silence as a sign of mourning for the situation in which the Mar Menor finds itself and together sang the hymn Sol y sal, dedicated to the lagoon and composed by the Cartagena band Nunakat.