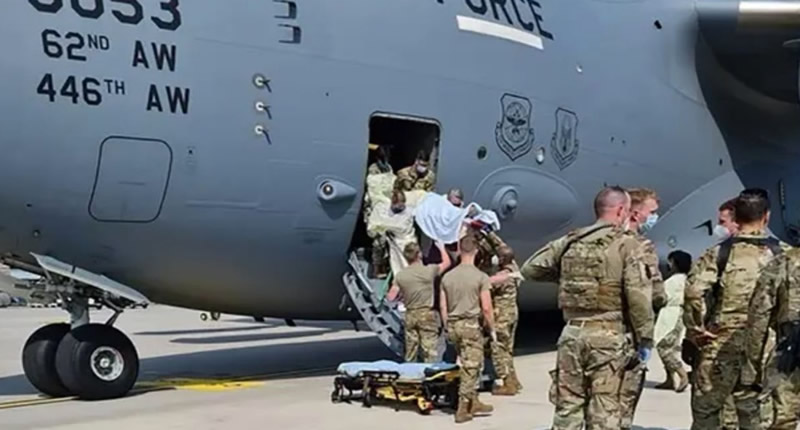 A pregnant Afghan woman has given birth to her baby in an aircraft that she was flying on – a U.S. C-17 evacuation flight from the capital of Kabul – that was taking her and her family to the safety of Ramstein Air Base in Germany, and she has decided to name the child ‘Reach’ after the name of the aircraft, ‘Reach 828’, that she was travelling in, along with hundreds of other evacuees, as the last few flights took off from the trouble-strewn country.

She had gone into labour during the flight, but, as a result of the altitude the aircraft was flying at, due to the low air pressure, her blood pressure had fallen, and she started experiencing complications, so the commander of the plane instructed the pilot to decrease the aircraft’s altitude, to increase the air pressure, which then helped the woman’s blood pressure to normalise again, possibly saving her life, and that of her baby.

A medical team from the 86th Medical Group were waiting as the aircraft landed in Germany and went on board to help deliver the baby just minutes later, in the cargo bay of the aircraft, after which, mother and child were taken to a medical facility that was nearby, in what was quite a dramatic start to her new life, and quite an anecdote to tell to the child when it grows older.

Air Force Gen. Tod Wolters, the head of the U.S. European Command, commented, “That child’s name will forever be ‘Reach’, and as you can well imagine it’s my dream to watch that young child grow up to be a U.S. citizen”, as reported by goodnewsnetwork.org.