Busted for carrying nearly 200 doses of cocaine in Almeria 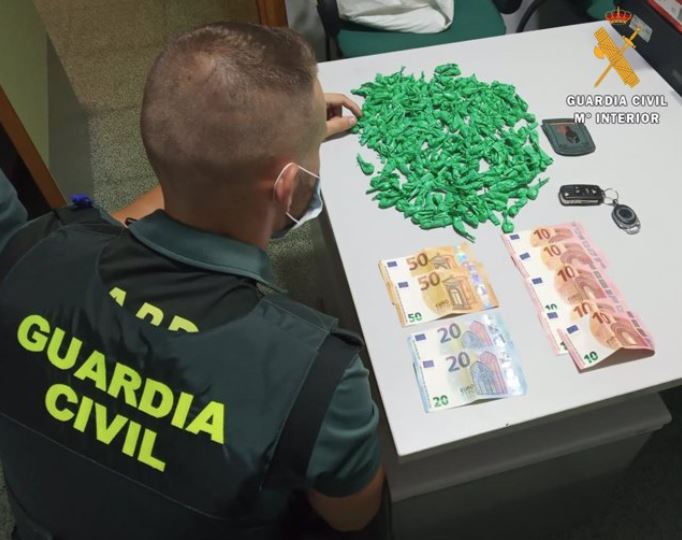 Guardia civil officers have busted one person for carrying nearly 200 doses of cocaine in Almeria.

Almeria’s Guardia civil officers were able to arrest one person for a crime against public health. They were able to seize nearly 200 doses of cocaine and a sum of cash too.

The officers had been patrolling in Almeria’s La Cimilla neighbourhood of Vicar when they came across one person who as soon as they noticed the officers, started behaving nervously. The person began trying to hide aluminium packets beneath their clothes.

After the officer’s suspicions were raised they carried out a superficial examination where they discovered multiple doses of cocaine. They also found 190 euros. The money had been split out ready to be exchanged. The officers went on to search the person’s car where they discovered further packets of cocaine which were packaged in the same manner as those which the person was carrying.

The officers found in total 190 dose of cocaine which weighed in at 160 grams. They also seized the 190 euros in cash.

Both the seized money and the drugs together with the arrested person have been handed over to Almeria’s Examining Magistrate’s Court with the relevant paperwork.

Three Spanish students have come up with a fantastic design which helps people who are afraid of getting injected. The Pinsoft invention is able to hide the needle from patients. It is thought that this could help people who are scared of being vaccinated.

According to reports many people have refused to be vaccinated against the ongoing coronavirus pandemic because they are scared of needles. The fear of needles is a common phobia and is called tripanophobia.

A new Spanish invention hopes to help with this fear and the anxiety that patients can suffer from. Pinsoft has been designed by three students from the Universitat Jaume I. Students Sofia Aparicio, Laura Martinavarro, and Juan Carlos Espert have created a wonderful design that this year has won the national James Dyson Foundation Award.