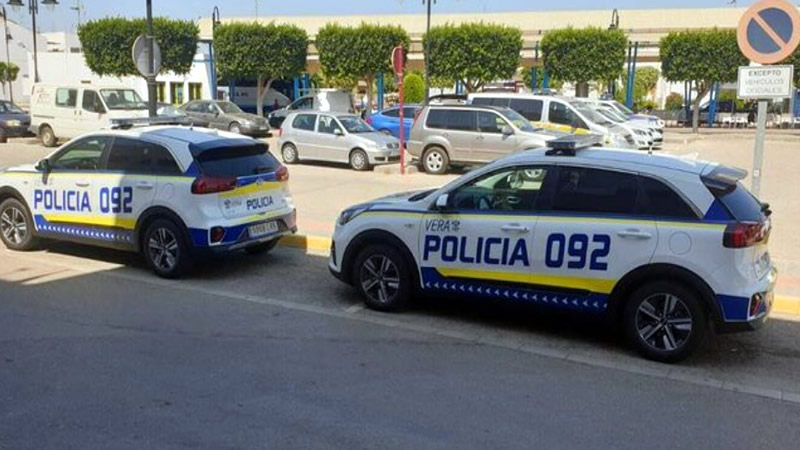 Second act of gender violence in a week in the Almeria town of Vera. image: policia local vera

FOR the second time in one week, the Local Police of the Almeria municipality of Vera have had to deal with a case of gender violence

Local Police officers in the Almeria municipality of Vera arrested a man in his 40’s, on the evening of Friday, August 27, who had allegedly assaulted his partner with whom he lives in a house in the town centre of Vera.

According to sources of the investigation, the switchboard of the Local Police of Vera received a call at around 11pm from a woman asking for help, without specifying the specific reason.

Two patrols were immediately deployed to the location given to them, where they found the caller, and a man, with the woman explaining to the officers that she had been the victim of an assault by her partner, something which the officers did not witness, but they did verify that the man was in an aggressive state, and that the couple were arguing angrily.

As a result of the woman’s complaint, the man was arrested, and after the couple had both been taken to the Vera health centre, the man was handed over to the Guardia Civil so that they could carry out the appropriate proceedings.

This is the second time in a week that the Vera Local Police have had to intervene in an alleged case of gender violence, as in the early hours of last Wednesday morning (August 25), they arrested another man, aged about 50, and living in Garrucha, who had burned his ex-partner with acetone. The woman is recovering from her injuries in a hospital in Granada, while he has been remanded in prison without bail.

It should be remembered that there is a free, 24-hour hotline for victims of gender violence – 016 – which does not leave a trace on the bill, but it does remain registered on the phone’s call list, so it is advisable to delete it, as reported by diariodealmeria.es.