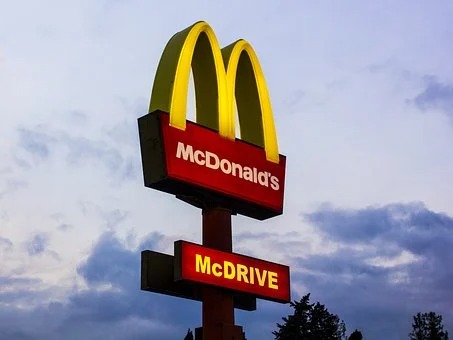 Strange sighting spotted going through a McDonald’s drive-thru in the USA.

In a strange sighting at a McDonald’s, Jessica Nelson from Mosinee in Wisconsin spotted a sight she never thought that she would see in the backseat of a Buick sedan. The car was several cars ahead of her in line at McDonald’s when she spotted a cow in the backseat, as the car headed through the drive-through.

Speaking to the Associated Press Jessica said: “I thought it was fake at first. Who puts a cow in a Buick?”

“Then its whole head moved.”

“I just took the video of it because I was blown away there was a cow in the back of a Buick,” said Jessica.

On the video she commented that: “That’s a whole (expletive) cow in the back of that car!”

According to Jessica the owner of the cow saw her post on Facebook and responded. Sadly, this sighting was not as strange as it seemed as the owner had just purchased three calves from an auction. It was one of these that Jessica had seen in the backseat heading for the drive-through, and the other two were said to be lying down in the car where they could not be seen.

In other quirky news, man gets 5 doses of 3 different coronavirus vaccines just to make sure that he is covered. Somehow a man in Brazil’s Rio de Janeiro reportedly managed to get a staggering five doses of three different vaccines in the space several weeks.

Official records state that the man who has not been named began be vaccinated for COVID in May. He managed to get multiple jabs before being caught out by vaccination staff as he attempted to get yet another jab.