Thousands give a symbolic hug to the Mar Menor 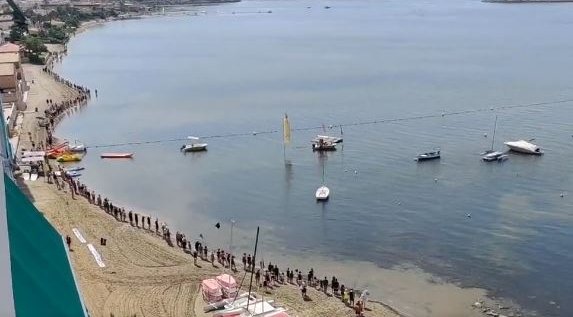 Thousands give a symbolic hug to the Mar Menor, and demand for the environment to be recovered.

Thousands of people have joined in an attempt to complete a 73-kilometre-long “hug” of the coastline in a bid to address the environmental disaster that is being witnessed at the moment. The protest stretched out over multiple municipalities in Murcia to highlight the tons of marine fauna that have recently died. The environment in the area is severely being hit by the lack of oxygen.

Jesus Cutillas, from the ILP Mar Menor Association commented that the hug “was about collectively expressing our pain and saying goodbye with dignity to all the animals killed by our greed”.

Mario Perez, the mayor of Los Alcazares was happy to see the number of people that turned out on the beaches. He commented on how the beaches were “full of people who have come from different places” to join the protest. The protest was also joined by the mayor of Murcia, Jose Antonio Serrano.

The mayor commented that: “We already support the ILP from the City Council of Murcia, because there has been a historical and eternal symbiosis between the municipality and the Mar Menor that has been passed down through the generations, because it belongs to everyone,”

“Also to those who have not yet been born, so we have to put all our eggs in the basket so that this unique lagoon in the world can be preserved with all the beauty and splendour it has always had, so we will support all initiatives to improve its environment.”

Cutillas highlighted that scientists have been right for years and said that “you have to change mechanics if the engine doesn’t stop breaking down, so here we have to listen to the many scientists, ecologists and biologists who have always been right and always said what would happen if we continued with polluting practices”.