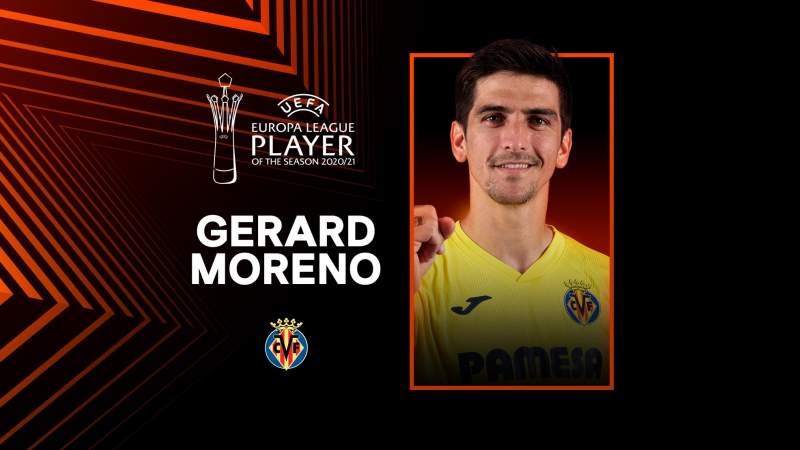 In last season’s UEFA Europa League, the Spanish striker was central to Villarreal CF’s success, scoring seven times and posting five assists. Moreno scored the opening goal in the final against Manchester United FC last May in Gdansk, Poland, as he helped his club win their first major European title in a dramatic penalty shoot-out.

The 29-year-old international obtained a total of 289 points in a vote by a jury comprising the coaches of the 48 clubs that participated in the 2020/21 UEFA Europa League group stage, together with 55 journalists selected by the European Sports Media (ESM) group. The coaches were not allowed to vote for players from their own teams. The final result was based on the total number of votes cast by the coaches and journalists.

Manchester United FC midfielder Bruno Fernandes came second with 160 points, while his clubmate Edinson Cavani was third, finishing with a total of 44 points.

In a video-recorded message, Moreno said, “Well, thank you all. I would have loved to have accepted the award in person but, as you all know, it has not been possible because of the Covid restrictions. I’m very excited about this award because for us, last season was a historic season for Villarreal as they won their first title in their history, their first European title.

“We are very excited about that. I’d like to thank everybody who’s made this award possible. Thank you to everybody who voted for me. To the technical staff and my teammates who, obviously, at the end of the day, have made it possible for me to have this recognition. To the club and our fans too, obviously. And thank you very much to all of you.”