The Russian monastery carved out of a chalk mountain 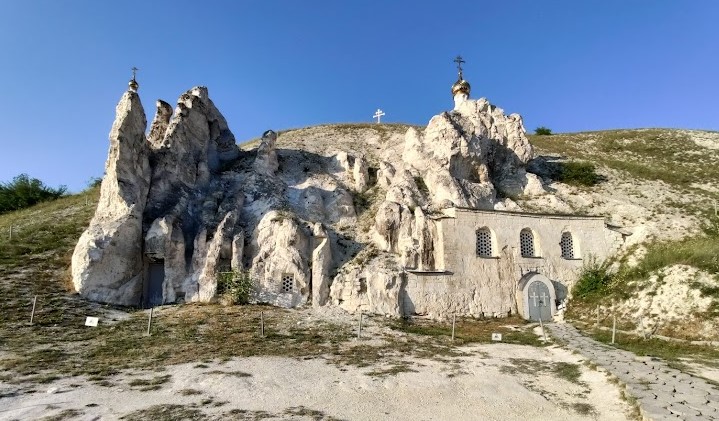 The Russian monastery carved out of a chalk mountain. image: google

There is an old monastery – the Church of John the Baptist – in the Voronezh region of Russia that is one of the world’s most visually striking Christian places of worship, as it is actually carved into a white mountain of chalk, located in the Divnogorye Museum-Reserve, blending in perfectly with its surroundings, with its decorative bell tower sitting on the mountain itself.

Historical documents list this unique building – near the banks of the Don river – as dating from the 17th century, to a time when Orthodox monks needed robust shelter to practice their faith in peace, while the Russian Tzar’s troops constantly fought in the region with cossacks led by the legendary Stepan Razin, and they discovered that the chalk cliffs of Divnogorye were the perfect location, and with chalk being such a soft rock, it was easy to carve and shape without the need of any special tools.

Other historians would have us believe the church goes back even further, to the 12th century, and that it was founded by Greek monks Xenophon and Joasaf, while others believe it was the work of two Sicilian monks, sometime in the 1600s.

Currently managed by the Divnogorye Museum-Reserve, the Russian Orthodox Church is hoping to once again get it back under its patronage, after it was confiscated during the Soviet era, but Marina Lylova, one of the founders of the monastery’s museum, last year claimed to RFERL that the church taking it back would be bad for the site, as they would destroy its fragile interior with renovations.

These allegations are reportedly vehemently denied by the Russian church, which claims that it will preserve all of the historical elements if its request is granted, but, to date, more than 5,000 names are on a petition opposing the monastery’s transfer to the Orthodox Church, as reported by odditycentral.com.