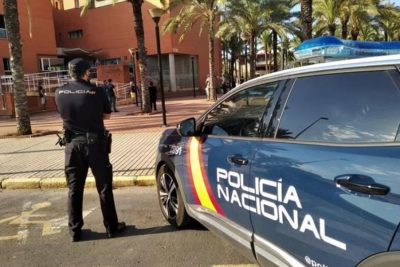 Man arrested by police for threatening to throw his wife out the window.

Police in Malaga arrested a 57-year-old man for threatening his 74-year-old partner with throwing her out of the windows during a heated argument.

The events took place in the Fuente Olletas area when a neighbour requested a police presence after hearing the threats from their apartment block landing.

The call was registered at around 1:40 pm in the afternoon and, according to The Sur, it was the victim’s son who notified the emergency services.

On the phone, he said he was hearing screams coming from his mother’s home, and that he understood that a man – her partner – was threatening to grab her by the neck and throw her out the window.

When officers arrived at the scene they were led to the apartment in question where they managed to open the door and found a woman, of Spanish nationality, and a man, of Argentine nationality.
Continued abuse
The woman immediately told officers that they had been together for years and that throughout that period of time she had been the victim of similar attacks.
She described beatings, psychological abuse and even occasions when, according to her, he would beat her and bother her all night so that she could not sleep.
The woman also referred to other occasions in which he prohibited her children from entering the apartment and others in which he deprived her the of use of her mobile phone by hiding it away for a time.

The woman expressed her intention to file a complaint and make a denuncia against her husband. The son corroborated a large part of her account and expressed his intention to back up the denuncia.

The man said he acknowledged that things were not going very well between them and told the officers that they argued on a regular basis. Although he denied ever having threatened the woman, the agents arrested him for breaching a restraining order.

It transpired that the man had threatened his ex-partner with a knife in La Palmilla. The National Police that time responded to an alert that there was a man with a knife at the door of a home in which a woman had locked herself in.

When officers arrived, she explained that the man had a restraining order for gender violence and that he had approached her in a local bar to speak to her.

According to her account, he had wielded a knife and threatened to kill her if she did not withdraw the complaint, at which point she managed to get away and take refuge in the bar until the police arrived.

Officers found the suspect nearby but by this time he had disposed of the weapon.

According to the police, the man offered active resistance to his arrest: he began fighting with the police and hitting the patrol car, but was soon handcuffed and detained for a breach of his sentence and the threats.