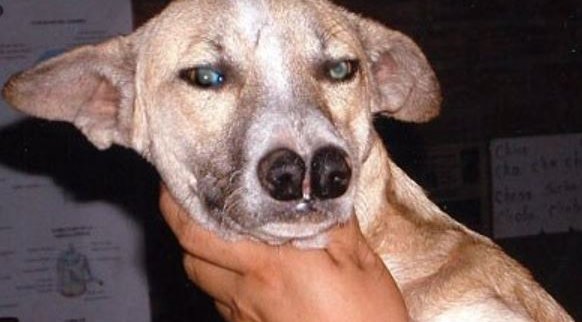 The double-nosed Andean tiger hound really has two noses, and they are that rare that they are not officially recognised as a breed by major breeding groups or kennels.

The double-nosed Andean tiger hound was originally a thing of legend but it is actually a breed used by hunters in Bolivia to track Jaguars through the Amazon. Back in 1913 legendary explorer Colonel Percy Fawcet returned from an expedition and told stories of a double nosed dog, but nobody believed him, and he was ridiculed for the stories. The dog then remained a mythical creature until the mid-2000s.

Colonel John Blashford-Snell was able to provide photographic evidence of the rare dogs who are thought to only exist in Bolivia. They have an extremely sensitive sense of smell and this is why they are used to track Jaguars.

Colonel Blashford-Snell previously told the BBC: “There is a chance that these dogs came from a breed with double noses that’s known in Spain as Pachon Navarro, which were hunting dogs at the time of the Conquistadors,

“I think it’s highly likely some of these were taken to South America and they continued to breed. They’re good hunting dogs.”

His first sighting of a double nosed dog was around a campfire one night, but he had not been drinking so he believed that he was seeing the real thing. He also remembered the story told by Colonel Percy Fawcet.

The Colonel eventually managed to see more than one of the rare dogs and said: “The Bolivian Army came and took DNA samples because they’re interested in the breed. He’s not the only dog like this, there are others in the area.”

In other news, heroic mum punches 65-pound mountain lion that dragged her 5-year-old son across the garden.

One heroic mum tackled and won a battle with a mountain lion with her bare hands after it grabbed hold of her young son and tried to drag him away from the family home.

The young boy who was only five years old was playing near the family home in Calabasas, California when he was shockingly approached by a mountain lion which weighed in at 65-pounds. The mountain lion grabbed the boy and ‘dragged him about 45 yards’ across the front garden according to Patrick Foy, spokesperson for the California Department of Fish and Wildlife.