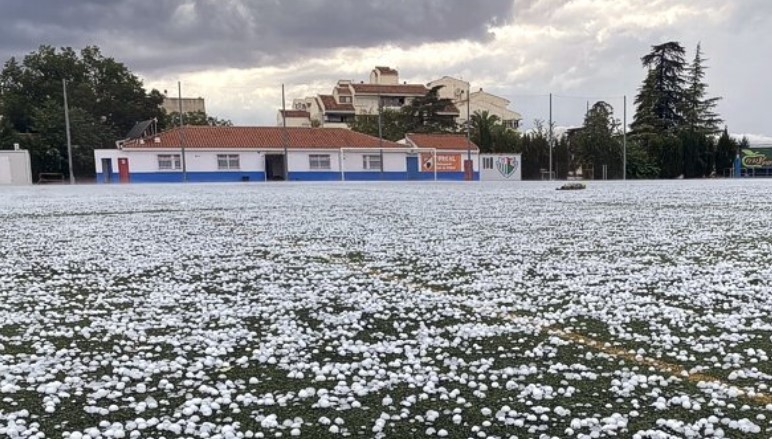 THE CITY of Antequera experienced a hailstone storm on Wednesday, September 1 that its mayor claims to have never seen the likes of before

Manuel Baron, the mayor of Antequera, speaking of the hailstones storm that his city experienced on Wednesday, September 1, said, “I am 58 years old and I have never seen anything like it”, as he toured the different areas of the city to check on the potential damage caused by the storm that took them by surprise after the State Meteorological Agency AEMET had activated the orange alert due to the risk of storms and rains throughout the region.

AEMET had forecast the possibility of up to 30 litres/m² of rainfall falling in the region between 4pm and 10pm, and when it came, it was a sudden hailstorm that discharged for around 20 to 30 minutes apparently, a long enough time to cover the streets, gardens, and the grass of the football field of the municipality.

Some of the hail reportedly caused significant damage to trees located in the urban area, and as the mayor explained, “it seems that they have been pruned, all the leaves are on the ground”, at the same time expressing his concern about the damage that could be caused in agriculture, especially in the olive groves that are just a few weeks from starting the olive harvest.

Streets were also flooded on the lower levels of Antequera, but Mr Baron was quick to point out that thankfully it did not cause significant damage.

Meanwhile, in another Malaga municipality of Fuente de Piedra, the town’s mayor, Siro Pachon, reported how firefighters had to assist in several homes located in the area of ​​the station due to the entry of water, “At the moment there has not been very serious damage, but if it continues like this, there can be”, he stressed.

The 112 Andalusia service initially managed eight incidents of flooding in Fuente de Piedra and five in Antequera, where the hailstorm led to the activation of the Municipal Emergency Plan at 5.45pm, but without any reports of personal injury, while in addition, the storm forced the interruption of rail traffic between Gobantes and El Chorro, in Malaga province, as reported by malagahoy.es.