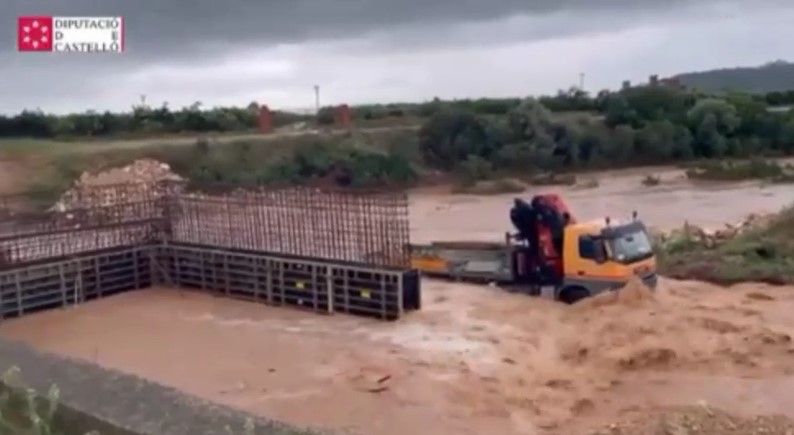 According to the State Meteorological Agency, AEMET, the depression isolated at high levels – DANA – brought around 9,000 lightning strikes and heavy rains in parts of the Community of Madrid, Castilla-La Mancha, Castilla y Leon, and Navarra during the first hours of Wednesday, September 1.

Among the most significant incidents reported were a lightning strike that burned the roof of a church in the Segovian municipality of Otones de Benjumea, and the fall of part of the roof of the Amazon plant in Illescas, Toledo, as well as heavy flooding in buildings and homes, power outages, along with falling trees and branches in different places.

In part of the province of Toledo, including the capital, the storm that hit at around 5pm left several towns flooded, leaving dozens of cars abandoned on the N-400 which connects the city of Toledo with the Santa Maria de Benquerencia neighborhood, with the cobblestones that had been damaged during Filomena being further damaged.

In Castilla-La Mancha, the Toledo town of Guadamur was flooded after the water reached a metre in height, according to Mayor Sonia Gutierrez, who reported that the torrent dragged away several vehicles, including hers and her husband’s.

Madrid was expecting the storms on Wednesday morning, where the service in the Metro was interrupted, and circulation was cut in some tunnels, causing the intensification of the usual traffic jams in the Spanish capital.

According to Efe, in the Valencian Community, Guillem Alsina, the mayor of Triator de Vinaros reported drivers trapped in their homes and vehicles after the Triator de Vinaros ravine overflowed as a result of the heavy rains, where emergency teams continued working from 12 midday to rescue all the people.

A campsite in the Tarragona municipality of Els Alfacs de Alcanar saw some seventy clients confined to the site’s facilities due to the damage caused to a dozen bungalows, where, according to data from the Catalan Meteorological Service (SMC), 232 litres/m² of rainfall fell, 77 of them in just one hour, with the Montsia and Baix Ebre regions in Tarragona also experiencing bad flooding, as reported by 20minutos.es.