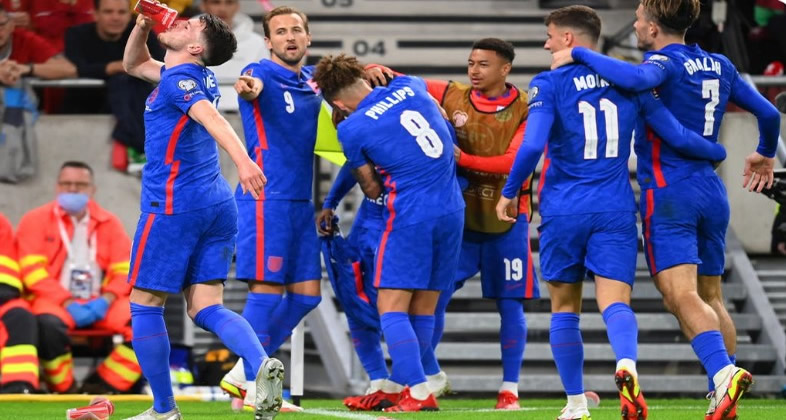 THE ENGLAND players were booed for taking the knee, pelted with objects during the game, and racially abused by the fans, but ended up putting four goals past Hungary

Gareth Southgate took his England squad to the volatile surroundings of the Puskas Arena in Budapest, this evening, Thursday, September 2, to take on Hungary in their Group I qualifying match for the 2022 Qatar World Cup, in front of a capacity 60,000 crowd, who sadly decided to boo the England players as they took the knee before kick-off.

It is so unfortunate when the happenings off the pitch end up being the main talking point after a match, but on this occasion, it is truly justified, and one can only wonder what FIFA will do now with the Hungarian FA, after several incidents occurred during the match, involving racist chanting, objects being thrown at players, and a flare landing on the pitch.

A poor first-half performance culminated in an electrifying 4-0 victory once the deadlock was broken after Raheem Sterling was on hand once again after 55 minutes, this time sliding home his 16th goal in his past 24 international appearances, only to be pelted with paper cups as he celebrated.

It was Man City star Sterling turning into the supplier as he set up his captain, Harry Kane, to nod a neat deflected header into the net on 63 minutes.

Harry Maguire got in on the action for England’s third after 69 minutes, rising to head home Luke Shaw’s corner – which saw him being showered with plastic cups before taking it – which Hungarian keeper Peter Gulacsi just couldn’t keep hold of, with Gulacsi’s second serious error of the night allowing Declan Rice’s shot to somehow run under his body and into the net for 4-0.

England captain Harry Kane, speaking of the abuse after with Sky Sports, described the incidents as “totally unacceptable”, while Gareth Southgate said, “We weren’t conscious of it on the side. I don’t know if the players on the pitch were. But everyone knows what we’ve spoken about for two or three years. They know what we stand for as a team, and we have to hope we can continue to eradicate racism not only in football but from life in general”.

In a statement released immediately after the match, the English FA wrote, “It is extremely disappointing to hear reports of discriminatory actions towards some of our England players. We will be asking FIFA to investigate the matter. We continue to support the players and staff in our collective determination to highlight and tackle discrimination in all its forms”.