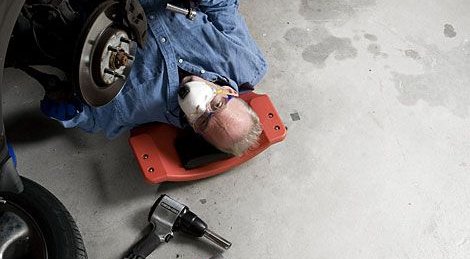 70-year-old man crushed by his OWN car while carrying out home repair. image: Wikipedia

70-year-old man crushed by his OWN car while repairing it at his home in Madrid.

A 70-year-old man is in serious condition in hospital after being run over by his own car in the garage of his house in the municipality of Arroyomolinos, in Madrid, according to a report from antena3.

The 112 Emergency services called out to the man’s home where they have managed to stabilise him, later transferring him by helicopter to the local Hospital.

The accident occurred while the man was carrying out a repair on his own vehicle at around 7:00 p.m. on Friday, September 3, in the garage of his villa, where he had a ramp installed for carrying out his own repairs.

Unfortunately, and without knowing the exact causes of how it could have occurred, the car travelled backwards due to the incline and ended up crushing the man against the wall of the garage.

Once transferred to the hospital, he was diagnosed with severe abdominal trauma and a serious hip fracture. Both the Local Police and the municipal ambulance of El Álamo collaborated in the emergency work, which was reported across social media networks by the 112 services of the Community of Madrid.

On June 5, an accident similar to the one that occurred this Friday was reported when a 55-year-old man was crushed to death by his van in Santiago, which was also in the garage of his home.

In this case, the victim left the car on the exit ramp of the garage and when he was about to turn on the light the hand brake suddenly failed and the vehicle pushed him and, due to the force and speed the vehicle was travelling, it ended up crushing him to death against a pillar.

In this case, the emergency teams could do nothing to save the life of the man who was declared dead at the scene of the accident.