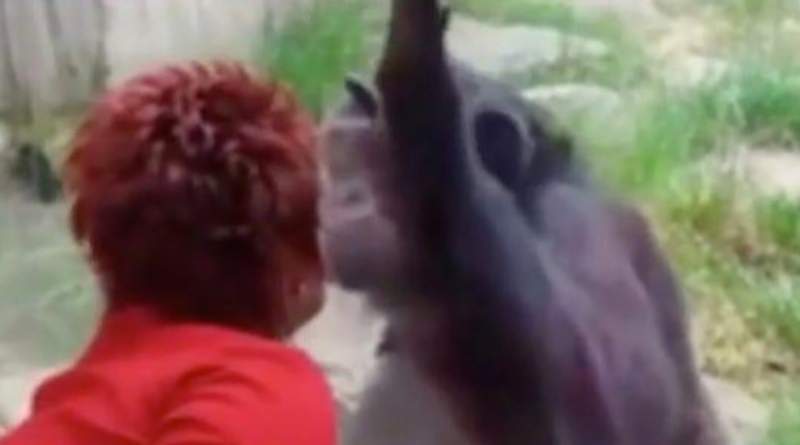 Belgian woman banned from Zoo over her "relationship" with a chimpanzee. image: twitter

Adie Timmermans is a Belgian woman who has been visiting Antwerp Zoo frequently for several years, but it has come to light that she doesn’t go because she likes the zoo, she has been going because she has reportedly formed a close “relationship” with one of its animals, a 38-year-old male chimpanzee called Chita, who she claims to be “in love with”, according to a report on Belgian television station ATV.be.

Timmermans has apparently been visiting Chita at the zoo for around four years, and claims that in that time they have developed a very strong bond which can only be described as a “relationship”, with the pair seen waving and blowing kisses at each other through the glass, but it seems their friendship is causing a problem for Chita with the other chimps, who are turning their backs on him, and not including him in their pack.

As a result, the Zoo’s management has issued Ms Timmerman’s with a ‘contact ban’, which prohibits her from going too near to the chimpanzee enclosure, and she must avoid making eye contact with Chita, with the television channel reporting, “Adie Timmermans, an animal lover and subscriber of the Antwerp Zoo from Deurne, has received a remarkable letter from the zoo”.

She told the channel, “I love that animal and he loves me. I haven’t got anything else. Why do they want to take that away?”, adding, “We’re having an affair, I’ll just say. Other dozens of visitors are allowed to make contact. Then why not me?”, claiming the Zoo was being unfair to her.

Sarah Lafaut, the Zoo’s curator, told ATV, “When Chita is constantly surrounded by visitors, the other animals ignore him and don’t consider him part of the group”, claiming that the other chimps have started ignoring Chita, and that he spends his time alone, “An animal that is too focused on people is less respected by its peers. We want Chita to be a chimpanzee as much as possible”.