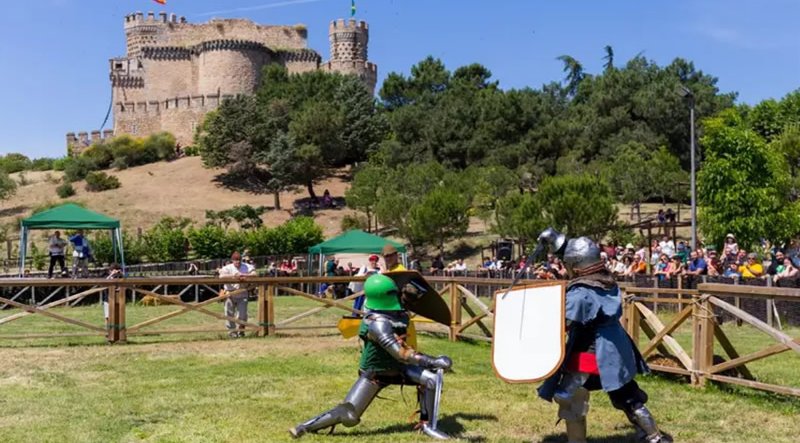 The Community of Madrid is inviting people to visit the castle of Manzanares El Real, where they will stage a series of exhibitions of medieval combat, in which these historical struggles will be faithfully reproduced, to take place on September 5 and 11, and October 16 and 17, with two sessions a day and free admission, by reservation only.

They have announced that the palenque of the garden of this stunning castle will be transformed for four days into a unique enclosure where these combats will be recreated, in which several fighters and a referee will participate, armed and dressed in authentic costumes of the time, all presented by a commentator who will explain the different types of combats, duels, and weapons, as the action takes place.

The types of medieval confrontation on offer will consist of five different combinations, such as the duel between two knights; five against five; ten against ten; sixteen against sixteen, and twenty-one against twenty-one.

Currently, this practice, also known as ‘Historical Medieval Battles’ (HMB), is considered a contact sport, and, in Madrid, its main club is ‘Ursus Custodes’, and it is the members of this club who are in charge of carrying out these exhibitions in the Castle, recreating with strict historical rigor the weapons, equipment, and code of honor of the time.

A full security protocol will be put in place, despite the spectacular nature of the combat sequences, complete with authentic sounds recreating the bloody medieval battles, but during which the fighters will be well protected, using weapons that do not have an edge or edges.

The castle of Manzanares El Real is one of the “jewels of Madrid’s heritage”, that also has an orchard of medicinal and industrial plants, landscaped spaces, a labyrinth, and a palenque, as well as a wide program of activities such as guided tours, children’s workshops or theatrical performances, as reported by larazon.es.