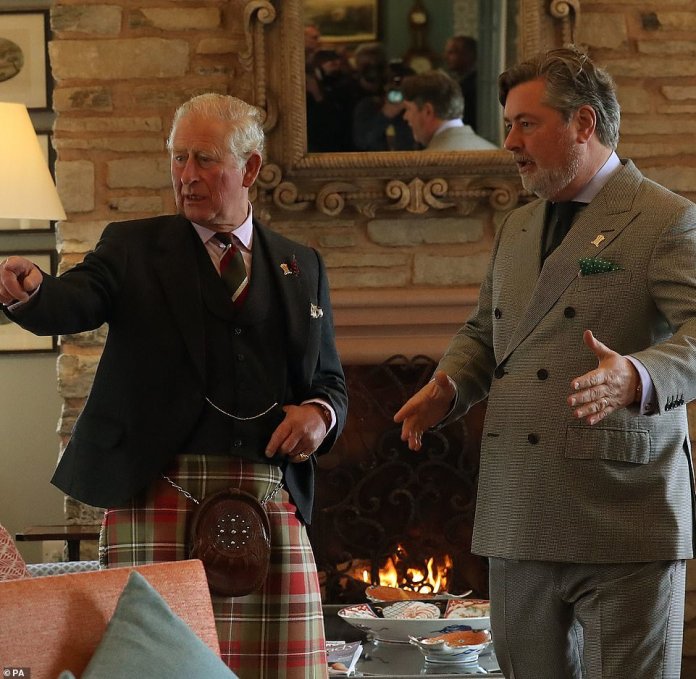 Prince Charles’ closest aide Michael Fawcett has been forced to resign over a cash for honours scandal.

The Prince of Wales’s closest aide dramatically resigned last night after a report from The Mail on Sunday exposed how he offered to help secure a knighthood and British citizenship for a billionaire Saudi donor to Charles’s charity.

Michael Fawcett stepped down as chief executive of The Prince’s Foundation after being confronted with a letter in which he said the Royal charity would be ‘happy and willing’ to use its influence to help businessman Mahfouz Marei Mubarak bin Mahfouz, who had given it hundreds of thousands of pounds.

The charity said that Mr Fawcett had ‘offered to step down temporarily’ while its trustees investigate the matter.

The ‘cash for favours’ scandal centres on how donations for Charles’s cherished scheme to renovate Dumfries House, a Palladian mansion in Scotland, were solicited and what may have been promised in return.

The bombshell letter, written by Mr Fawcett on August 18, 2017, to Busief Lamlum, an aide to Dr Bin Mahfouz, says:

‘In light of the ongoing and most recent generosity of His Excellency… I am happy to confirm to you, in confidence, that we are willing and happy to support and contribute to the application for Citizenship. I can further confirm that we are willing to make [an] application to increase His Excellency’s honour from Honorary CBE to that of KBE in accordance with Her Majesty’s Honours Committee.’

As a former senior valet to the Prince of Wales, Michael Fawcett was once known for squeezing Charles’s toothpaste so the heir could brush his teeth.

The pair were so close that the prince has said: “I can manage without just about anyone except Michael.”

The son of an accountant from Orpington, southeast London, Fawcett arrived at Buckingham Palace in 1981 as a footman to the Queen. Staff mocked him for adopting a double-barrelled name, Buxton-Fawcett, in an effort to fit in. He rose through the ranks and became an indispensable aide to Charles, siding with the prince during his divorce from Diana.

Mr Fawcett was forced to leave Charles’s service before, in 1998, after allegations of bullying from other staff.

Thank you for taking the time to read this article, please remember to come back and check The Euro Weekly News website for all your up-to-date local and international news stories and remember, you can also follow us on Facebook and Instagram.