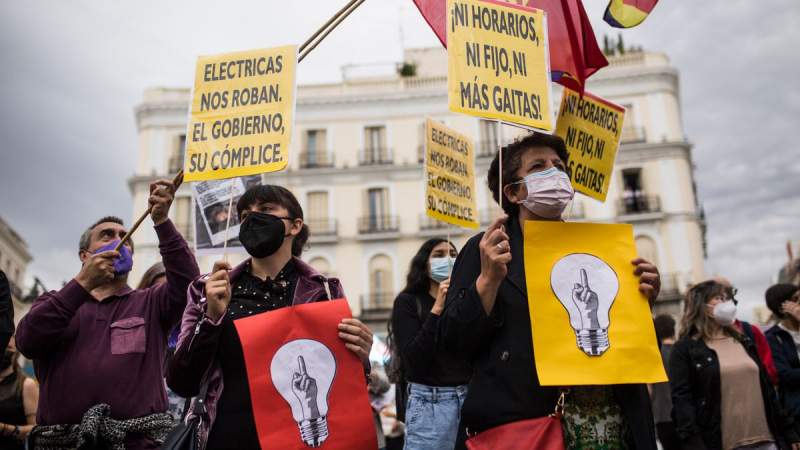 The Communist Workers Party of Spain (PCTE) has called for rallies across Spanish cities against what they call the “dizzying and abusive” rise in electricity prices.

Under the slogan ‘No to the tariffazo’, the party, which has joined with with the youth organization Colectivos Jóvenes Comunistas, has organised protests for September 11 in cities of the region of Andalucia, Castilla y Leon, Basque Country, Cantabria and Asturias.

In Andalucia, protests will be held in Cordoba, Malaga and Seville; in Castilla y Leon in Leon, Salamanca and Valladolid; in the Basque Country, in Bilbao and San Sebastian. There will also be demonstrations in Oviedo and Santander.

Rallies in Madrid and Barcelona will take place on September 14 and 16, respectively, as reported by the PCTE in a statement.

In Spains’ capital Madrid, a meeting is called for in front of the Congress of Deputies, at 18.00 hours today, Sunday, September 5, while in Barcelona the concentration will take place in front of the Sub delegation of the Government at 19.00 hours.

“We accompany the call for these concentrations of a campaign against the accelerated process of loss of purchasing power and setback in the quality of living and working conditions of the working class, putting the focus on the necessary role of the Government in this process of impoverishment and precariousness,” said a spokesman for the party.

In this context, the party accused the Government of “clearly governing for the capitalists and offering only crumbs to the workers”.

The Spanish Prime Minister Pedro Sánchez has said that at the end of 2021 consumers would have paid the same for electricity as in 2018.

“We are working with a plan to reach a concrete commitment, and that is that at the end of 2021 the Spaniards look back and see that they have paid a similar amount in the electricity bill and similar to the one they paid in 2018.

In a statement, Pedro Sánchez said: “When the end of 2021, electricity will have been paid for the same as in 2018”

That is is the objective and the commitment: that all citizens with average consumption at the end of 2021 pay a similar amount and similar to the one they paid in 2018, logically with the discounted CPI “, said Sánchez in an interview published by ‘El País’.