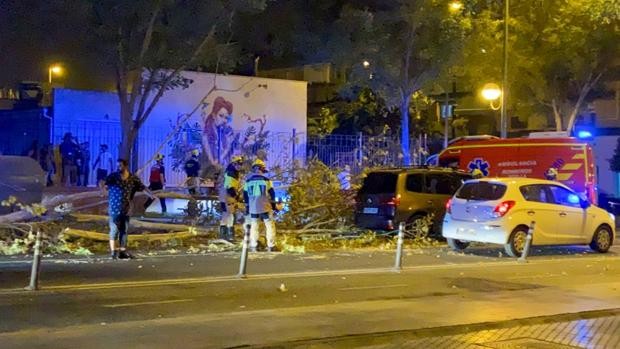 Trapped man rescued by emergency services in Sevilla after high winds cause havoc across the province.

The emergency services had to intervene to free a man trapped inside a car on Resolana street, after a tree fell on him, smashing the roof of the vehicle. Firefighters had to use special cutting equipment to free the man who luckily escaped unharmed.

The gale, which started at around 9:30 p.m. caused considerable alarm among Sevillians,  who had already had cities coked in thick dusty North African dust delivered by the very high winds blowing upwards from the coast.

Emergency services had recommended through their Twitter profile to take extreme precautions against travelling outdoors, and above all, avoid wooded areas where trees were likely to fall or become unrooted.

Warnings for high wind had been communicated to and coordinated in municipalities such as Villaverde del Río, Dos Hermanas, Alcalá de Guadaíra, Los Palacios and Villafranca, Guillena and Espartinas.

In Los Palacios, scaffolding collapsed on Virgen de los Reyes street without any evidence of injuries, while part of the roof was ripped apart in the municipal pavilion Pepa Flores de Camas, again without causing any personal injury to any residents.

As reported by Emergencias 112 Andalucía, a service attached to the Ministry of the Presidency, Public Administration and Interior of the Board, around fifty incidents were been registered yesterday, Sunday, September 5, in the Sevillian province.