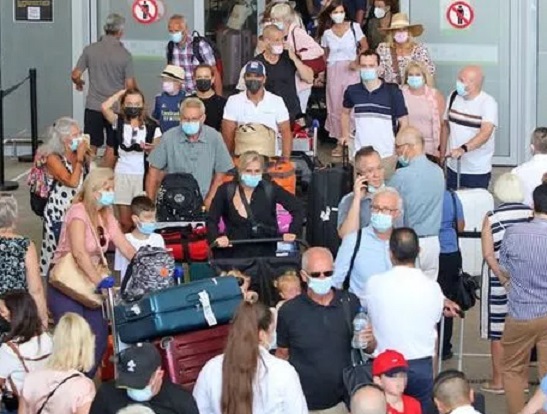 MALAGA airport on Spain’s Costa del Sol faced chaotic scenes on Sunday night, (September, 5) as a passenger revolt was sparked off due to long queues and a shortage of customs officers on duty.

According to posts on social media, hundreds of angry passengers, frustrated through waiting over an hour in the arrivals queue, lost their cool and pushed forwards which led to barriers crashing to the floor and airport staff calling security.

Angry Spaniards were filmed shouting “Fuera fuera” – “Get Out Get Out” in English – in response to the queues and delays at Malaga airport last night.

Witnesses claim tourists had taken matters “into their own hands” after being forced to wait “forever” to be allowed through by police and other officials checking passenger locator forms.

Jim Ramsden, one of the Brits who posted footage of the chaos on social media, explained the situation: “It was arrivals at 11.30 pm last night (SUN) and it was all nationalities who just got fed up standing in a queue that wasn’t moving.”

Mejulie Traynor, who was also in the queue, added: “I was there too but I behaved myself and queued for an hour.”

As onlookers saw other passengers revolting, someone was heard muttering: “They’ve given up waiting haven’t they People are just going for it.

“Shall we join them? Am I going to get shot by a Spanish policeman if I do.”

Agnes Gillespie on FB said: Needs more organisation for the large influx of flights and passengers !!!!

Andrew Mairs, a British expat from Malaga, who returned from a short holiday in the UK, said he couldn’t believe his eyes and had never seen anything like it. “I was actually a bit worried over the situation, i just wanted to hurry and get out, it was so warm and stifling in that long queue- very tiring and frustrating- it seemed we would all be here for days”.

Families with babies and pregnant women, and OAPs and were among those reportedly forced to queue for up to five hours at London’s Heathrow Airport.

Furious holidaymakers faced a fifth day of chaos amid continuing issues with eGates and a lack of staff at Europe’s busiest airport. Brits claim they were crammed into hallways with no social distancing and made to walk long distances as shuttles weren’t available.