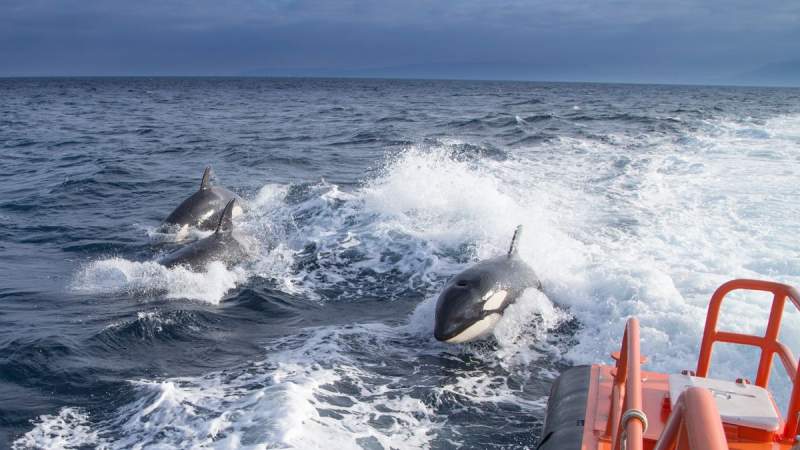 Killer whales that have been attacking sailboats in the Strait had been attacked and harpooned before.

Killer whales that this summer have been attacking small sailboats in the Strait – at least 150 interactions according to data from the Atlantic Orca Task Force – have previously been the target of attacks and harpoons, as shown by photos and videos provided by an orca tracker for educational purposes and scientists who work for tourism companies.

These contacts have caused the Cádiz Maritime Captaincy to ban sailboats of up to fifteen meters in the Ensenada de Barbate (Cádiz) until September 7 to avoid any risks, since these ‘cetaceans’ seem to have specialised in breaking the rudders of these boats, leaving them adrift, with the consequent risks of sinking.

Francisco Gil, has been a skipper, diving teacher and underwater camera operator,  and director since 2014 of the Cetacean Interpretation Center and Aula del Mar de Tarifa (CICAM), he has also been working as a tracker for twenty years.

Gil explained to Efe that the unprecedented behaviour of killer whales, which he defines as extraordinarily intelligent and empathetic, could well be a response to the attacks they suffered last summer and have continued to suffer this summer.

Collaborator of several university centres of Marine Biology, Oceanography and Marine Sciences, Gil has dived with all the species of cetaceans in the Strait until the prohibition of this activity in 2007 and has been diving with orcas for seven years.

In his daily outings in search of cetaceans, he verified last year that there were killer whales with injuries, with scars, and some that had been harpooned with a hook (type of spear)- episodes that he has ensured have been repeated this summer.

In addition to photos on the surface, Gil keeps underwater photos – made with the permission of the Ministry of Ecological Transition and taken by Rafael Fernández Caballero – of the injured killer whales, and a video of about five minutes of duration recorded by the crew of a sailboat that at the time was being attacked by cetaceans, the sailors respond by using the boat hook with equally aggressive means.

Killer whales, which can weigh up to five and a half tons, do not attack sailboats, which they could easily wreck because, according to Gil, “They are very clever. They are not attacking. If they wanted to capsize a ship they would do it.”

That explains why the contacts this summer have become so frequent and that until last year had practically not occurred.

Francisco Gil interprets them as “a protest” by the animals.

This is a new hypothesis from a person who spends a lot of time with orcas. Although scientists recognize that there are several hypotheses on the table and that this unusual behaviour needs to be scientifically verified: since it may be a game, a tuna hunting training, or an animal response to something we- as the human race- are doing something wrong.

Historically, Gil insists that orcas and men have lived together and even collaborated in fishing for tuna, since every spring when shoals of tuna reach the Mediterranean, the orcas corner them and push them towards the traditional Cadiz traps- an ancient art.

Francisco Gil regrets that these events are taking place in a period of an abundance of tunas and has considered that the fishing quotas should be reviewed to expand those of the traps and other traditional arts of the fishermen of the region so as to leave enough food for the intelligent creatures.

Atlantic killer whales are a “very social” type of dolphin. Specifically, there are about 50 different species distributed in five families.

They are a semi-resident population that swim from the Strait to the Cantabrian depending on the season of the year. This species is in danger of extinction and the causes are multiple, such as commercial hunting, habitat pollution, excessive noise, decrease in prey (Tuna).