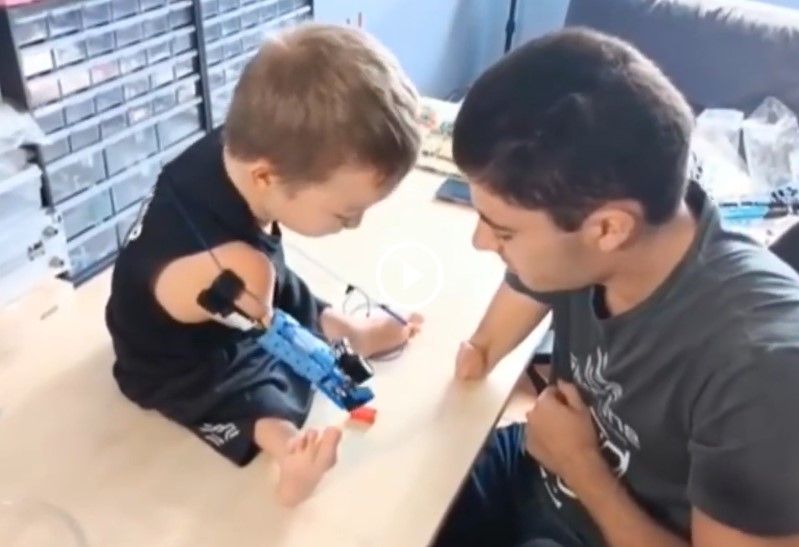 “My name is Bektur. I am 8 years old. I am different”, this is how little Bekturm from Strasbourg in France, defines himself to people, as he has a growth problem that he so sadly, yet happily, insists makes him different from other boys of his age, but then his mother got in touch with someone who she thought would understand him well, and that is how he came to meet David, who is known as ‘Hand Solo’.

David is from Barcelona, ​​and he also has a disability, only having one hand, but for years he has been manufacturing prostheses with plastic Lego pieces, the world-famous construction game for all ages, which he does for both himself and has made for many other people, something which is not easy, “You have to buy the pieces, then build it at home”, says David, who one day received a 15-minute call from Beknur and his family, and just €15 euros later he had his prosthesis ready for the little boy.

“Come on, come on, we can do it!” David said to the 8-year-old in English when his family travelled to Barcelona to test this new piece of plastic engineering, and it worked, it suited him perfectly, and not only physically, Beknur was delighted, “I saw that he was getting up very well, that he was overjoyed. He is a super mature and grateful boy”, says the Barcelona man, witnessing Beknur so happy from the moment he handed him the prosthesis and fitted it.

The operation of the prosthetic is relatively simple, involving a mini pulley that lets Beknur move the gripper with his foot, while at the same time, with another special prosthesis he can use his mobile or tablet.

As a result, Beknur has returned to his home in Strasbourg, making everyone smile with his enthusiasm and humour, “If you lack an arm, and you are ‘Hand Solo’, then I am ‘Hand Zero’, because I have none. That is the joke this eight-year-old boy has already made to me”, laughs David, relating the joke of his new friend, a story which is such a beautiful symbiosis thanks to the ingenuity of this university student who has already become a popular celebrity on the social networks, as reported by cadenaser.com.