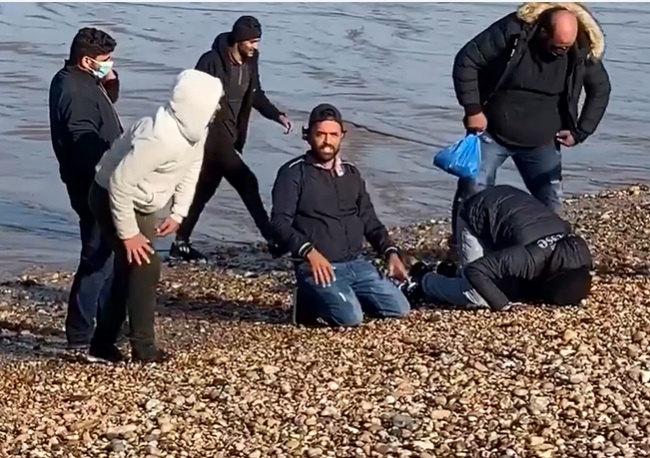 Desperate migrants kneeled down and kissed British soil today after making the perilous trip across the Channel.

Dozens of migrants were snapped getting on their hands and knees on the pebbled beach in Dungeness, saying they were relieved to be safely back on land after making the dangerous journey.

The group – mostly men and a couple of women – arrived on boats on Tuesday afternoon, (September 7) where they were met by the RNLI and Border Force.

The number of migrants reaching the UK has hit around 1,600 in the past four days after another 150 on small boats were picked up in the Channel today.

Among those to arrive today, Wednesday, September 8, was a woman carrying a baby wrapped in a blanket who was helped ashore by a Border Force officer, while other children old enough to walk were led up to the Kent quayside.

The number of migrants arriving today have not yet been officially released, though they are thought to be around 150 so far.

Another 158 migrants arrived on Sunday in the first landings in two weeks. On Monday, 785 migrants in 27 incidents were intercepted according to official Home Office figures, taking the number this year so far to 13,370.

Boris Johnson has said Priti Patel is dealing with migrant crossings in the English Channel in the “best possible way” by making sure that they don’t leave French shores.

Speaking in the House of Commons on Wednesday, the prime minister hinted he would use tough measures to address the issue, saying: “As times goes on and this problem continues, we are going to have to make sure that we use every possible tactic at our disposal.”

In what he described to MPs as a “perennial problem”, Mr Johnson said Ms Patel was dealing with migrant crossings “in the best possible way”.

The home secretary is holding talks with her French counterpart on Wednesday afternoon about the number of migrants crossing the English Channel. Ms Patel and the French interior minister, Gerald Darmanin, are both attending the meeting of G7 ministers in London.