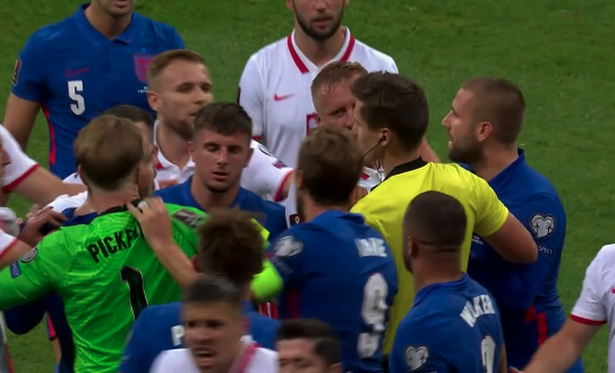 Furious England players clashed with their Poland counterparts after the half-time whistle tonight, Wednesday, September 8, as Kamil Glik and Harry Maguire were booked by the referee in ugly scenes in Warsaw.

The first half of the match was closely fought, with neither side finding an opening in their crunch World Cup 2022 qualifier.

With the hosts taking a tough physical game to their opponents, tension boiled over after the whistle had been blown for half-time.

With almost every player from both teams getting involved in the grabbing and shouting, both Glik and Maguire were booked by referee Daniel Siebert before the teams retreated to the dressing rooms.

“England have got to keep their heads, Gareth Southgate will be happy to get his players into the dressing room and just calm them down. England need to be sensible and just get the job done.

“There’s been a frantic pace to the first half, not so much quality, but both sides have been totally committed. If we have another half like that, there will be goals and there will be chances,” Former England captain Terry Butcher told BBC Sport at the break, with the scores still goalless.

England beat Hungary 4-0 in a match that was marred by racist abuse aimed at Raheem Sterling and Jude Bellingham by a section of the home crowd in Budapest last week, before making sweeping changes for another 4-0 rout of minnows Andorra on their return to Wembley on Sunday. Southgate has reverted back to the same XI that beat Hungary this evening.