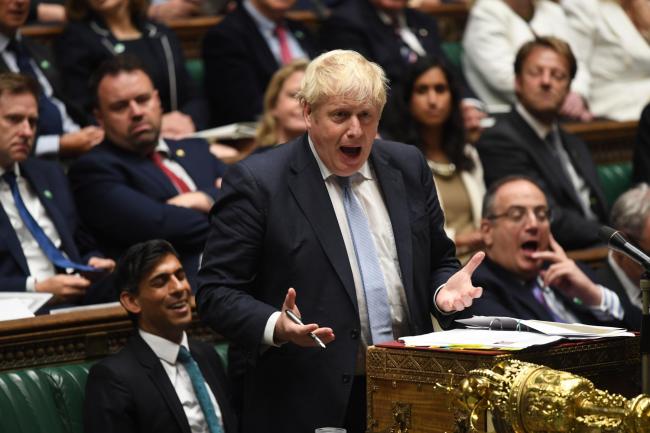 MPs back Boris’s £12bn National Insurance raid as a number of Tory rebels decided to abstain.

Boris Johnson’s proposal to hike national insurance to tackle the NHS backlog and social care reform has won the backing of the House of Commons.

A handful of Conservatives however raised concerns over the tax hike during the debate — some even labelling the plans “un-Conservative” — but rather than voting against the government they abstained on the motion.

Mr Johnson did not rule out the possibility of people having to sell their homes to fund care if the government’s social care reforms go ahead after a vote in the Commons at 7 pm.

He twice failed to answer questions from Sir Keir Starmer about where working-class people will get the funds to pay for social care if not from selling their own homes, the Labour leader moved to discuss the double-edged effect of NI hikes and Universal Credit cuts on poorer people.

Mr Johnson would only say the government planned to “deal after decades with the catastrophic costs faced by millions of people” and the risk of having to sell up.

Dominic Cummings today reignited his war with Boris Johnson as he blasted the Prime Minister’s £12billion tax raid and claimed the extra cash will not solve the NHS treatment backlog.

The PM’s former top adviser said ‘No10 can’t do anything but spend’ taxpayers’ money as he said the National Insurance hike was a ‘good day’ for Labour and Tory MPs should ‘put all those ‘party of low tax’ speeches away’.

He said the PM’s plans ‘won’t solve waiting lists’ or problems in the social care system as he argued the Tories are making young people ‘work harder to subsidise older richer people’.

Mr Cummings said the tax hike comes after younger generations had already been ‘screwed by a decade of hapless Tory government’ which had left many people unable to buy a house and with lower wages.

The Government is said to be considering introducing such a measure to pay for social care funding and support the NHS in the wake of the COVID-19 pandemic. However, Mr Johnnson and Chancellor Rishi Sunak are set to face stiff opposition from the public, their own party and business owners across the country.