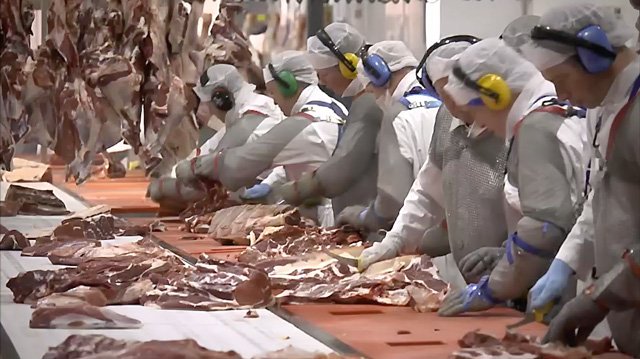 Industrial animal farming is increasingly damaging the climate and biodiversity, according to the ‘Meat Atlas‘ released by Heinrich-Böll-Stiftung and Friends of the Earth Europe.

The livestock industry is responsible for up to 21 per cent of global greenhouse-gas emissions. This figure is likely to escalate if the global meat and dairy consumption trends continue.

The Meat Atlas 2021 reveals that meat production is estimated to increase by 40 million tons by 2029, reaching 366 million tons of meat per year. To keep up with this, industrial animal farming is on the rise and keeps pushing sustainable models out of the market.

Globally, three quarters of agricultural land is used to raise animals or the crops to feed them. Livestock farming and soybean cultivation are the biggest contributors to deforestation, whose effects include soaring emissions, destruction of indigenous communities’ and small farmers’ livelihoods, and pandemics.

The food sector accounts for between 21 per cent and 37 per cent of global greenhouse-gas emissions. Emissions from industrial animal farming account for around 57 per cent of this.

Taken together, 20 livestock firms are responsible for more greenhouse-gas emissions than Germany, Britain or France. The six of them that are headquartered in the European Union have not disclosed the total emissions from their supply chains.

Between 2015 and 2020, global meat and dairy companies received over $478 billion in backing from 2,500 investment firms, banks, and pension funds, most of them based in North America or Europe.

Stanka Becheva, Food and Agriculture Campaigner at Friends of the Earth Europe said, “Industrial meat farming is fanning the flames of climate crisis and biodiversity collapse while threatening the health of farmers, workers and consumers – the evidence is resounding.

“The EU needs to curb this insatiable industry, but right now its leaders are just eating out of Big Agribusiness’ hand. Europe must act to clamp down on deforestation and human rights violations in supply chains, facilitate the switch to more plant-based diets, and redirect billions of euros of subsidies and finance to small sustainable farmers.”