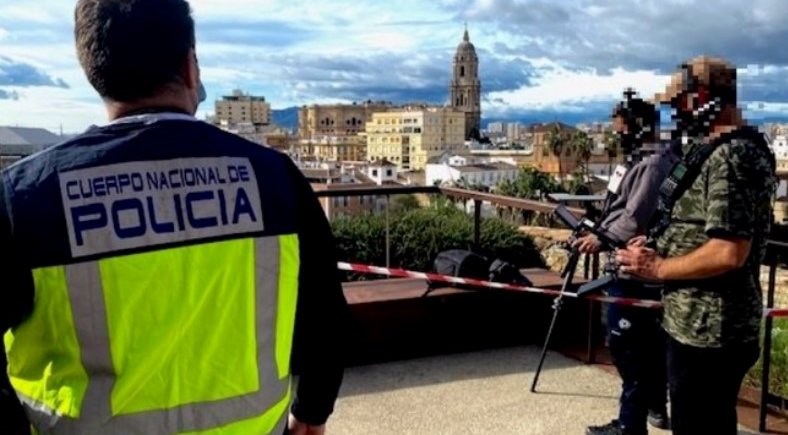 Specialised officers from the National Police, trained in Air Safety and Protection are based at the airport in Malaga to control the illegal use of drones

Specialised officers from the National Police have reportedly been based at Malaga airport since last year, who are trained in Air Safety and Security, responsible for checking that flights, both professional and recreational, are carried out in compliance with aeronautical regulations, through the use of drones.
As reported by the National Police Force in a statement, their task is to detect flights that do not comply with the law, which may pose a danger to safety, and in order to do this, these officers have systems called Contra-UAS.
Contra-UAS consists of a device capable of detecting the flight of a drone within a radius of about five kilometres, and is equipped with a neutralisation device that cancels the radio frequency signals received by the drone.
Despite the efforts of the State Aviation Safety Agency and different institutions to raise awareness of the regulations on the use of drones, officers continue to detect flights, usually recreational, that do not comply with aeronautical regulations, thus endangering the safety of other manned aircraft using the airspace, as well as people and property.
This regulation establishes as a novelty that the flights of this type of aircraft will be carried out on the basis of three operational categories, based on the risk of the operation: ‘open’, ‘specific’ and ‘certified’, each of them subject to different limitations conditioned by, among others, the weight of the drone, the presence of people, and its proximity to buildings.
All users intending to fly a drone are obliged to register as ‘operators’ at the electronic headquarters of AESA (Agencia Estatal de Seguridad Aerea), and obtain an operator number according to European regulations, a personal number that must be visibly affixed to each of the aerial vehicles owned by the operator.
Operators are also required to have a minimum amount of accreditable training depending on the category in which they intend to fly, for which they must be trained and take a knowledge test.
Another of the most important aspects to take into account is what has been called ‘UAS Geographical Zones’, in which UAS operations may be permitted, restricted, or excluded, for reasons of public safety, protection of infrastructure, and other airspace users’ protection of privacy, and the environment.
One of the most common restricted areas are airports or aerodromes, where drone operations cannot be conducted within eight kilometres, unless a number of very specific requirements are met.
Herein lies the difficulty of using drones in locations such as Malaga or Torremolinos due to the proximity of Pablo Ruiz Picasso Airport, where they can only be flown as a hobby in airfields, which at the moment hardly exist in Spain, and by fulfilling certain prerequisites.
Finally, the National Police remind that “a drone is not a toy”, hence the importance of flying responsibly to ensure the safety of the airspace and the public, because according to the legislation, penalties could lead to fines ranging from €60 to €4,500,000 euros depending on the type of operation, as reported by malagahoy.es.
Currently, the limitations due to airspace limitations can be consulted on the website https://drones.enaire.es/.