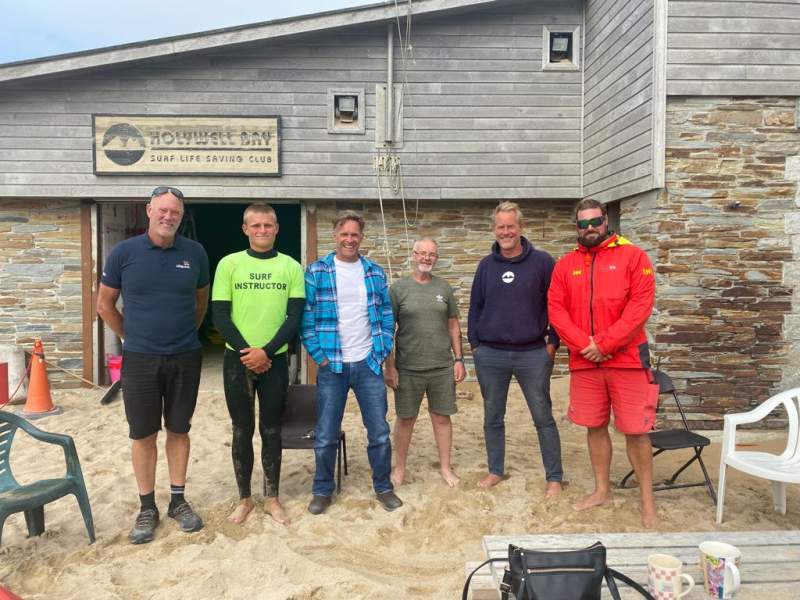 As the nation acknowledges those in the emergency services across the UK as part of 999 Day (Thursday 9 Sept), one man has returned to a Cornwall beach to pay thanks to the RNLI lifeguards that helped save his life after he suffered a cardiac arrest.

David Smith, 65, was taking part in a surf lesson on Holywell beach near Newquay when he suddenly collapsed suffering a cardiac arrest, in August last year.

Quick thinking surf instructors, Lee Griffin and Jago Griffiths, who are also qualified RNLI lifeguards, immediately radioed for help and the defibrillator from the lifeguard hut.

An off-duty paramedic who was also on the water joined other RNLI lifeguards who quickly arrived on scene.

Together they started CPR and used the defibrillator in a bid to save David.

RNLI Lifeguard Adam Taylor said: “We responded as fast as we could, and we were able to deliver two shocks on the defibrillator within five minutes of David collapsing.

“Together, we managed to deliver effective CPR, something we train for as lifeguards but a skill we hope never to use for real.

“We were just amazed as David regained consciousness, although he was still in a very critical condition.”

Once conscious David was airlifted to the Royal Cornwall Hospital by the Cornwall Air Ambulance.

A year later, after recovering from major heart surgery, David recently returned to the beach to thank the RNLI lifeguards who helped save his life.

“I had to go and see the people that saved my life,” he said.

“It was very emotional being back there, but they made us feel so welcome.

“At the time I didn’t know what to say to be honest, but we chatted through what happened that day. I just knew I really wanted to meet them face to face and thank them.”

David’s daughter Lyndsey, who watched on in horror at the time, said: “If the RNLI lifeguards and other responders hadn’t been there that day, it would have affected all of our lives – we literally owe them the world.

“There is nothing at all that I could ever say to them that would show how grateful we are.

“This was just such an amazing team effort from RNLI lifeguards, surf instructors, paramedics, the air ambulance and those that gave onward care in the hospital too.”