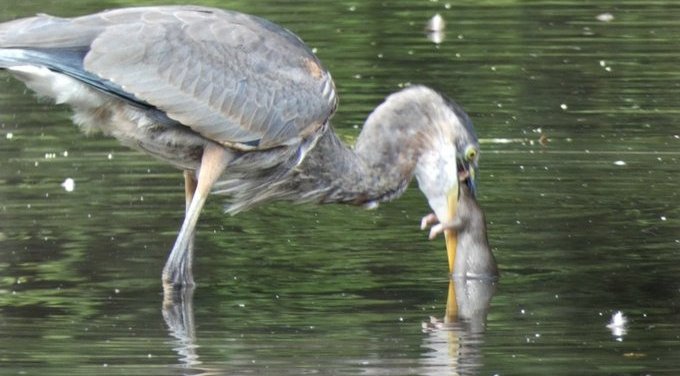 A rat-eating heron is New York’s latest hero. Shockingly New York has been ranked third on a list of cities having the most rats.

One great blue heron though is fighting back against the rats and has been called a hero in New York. The heron has been tackling rat disposal, and was caught on camera. The new master rat catcher went viral after a photo was posted on the Manhattan Bird Alert page.

Herons are known for catching anything that they can and eating it too. Last year one heron was caught on camera after it captured a baby alligator and set about eating it. Another heron was also spotted having nabbed itself a rather large catfish.

“They eat whatever they can catch!”

According to pest control company Orkin, New York has made it to third place on their list of most rat infested cities. The city has seen the number of complaints due to rodents increase since coronavirus restrictions were eased earlier this spring.

In other news, North Macedonia hospital fire kills at least 10 people. The Hospital was being used to treat people who were suffering from the coronavirus.

According to reports firefighters were able to extinguish the blaze in less than an hour after it started. The fire had broken out on Wednesday night at around 19:00 GMT.

Sadly, a thick cloud of black smoke could be seen rising in the air near the facility which is located in Tetovo in North Macedonia. At the moment at least 10 people are thought to have died, but Health Minister Venko Filipce has said that more casualties could not be ruled out.