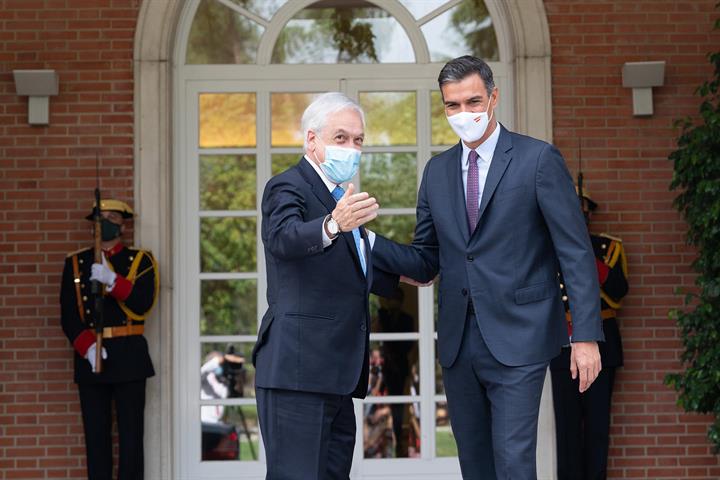 Prime Minister Pedro Sanchez has met the President of the Republic of Chile, Sebastián Piñera in Moncloa Palace, who is visiting Spain as part of his last European tour before the end of his mandate in 2022.

During the meeting, the leaders were in agreement on how to tackle the major global challenges. Sánchez and Piñera discussed the many issues of common interest, such as the evolution of vaccination and pandemics, the fight against climate change and Antarctic research.

Sanchez said, “The extremely important historical ties of friendship and cooperation that unite the two nations at all levels, and Spain’s interest in continuing to deepen these ties”. During the meeting, he also underlined Spain’s support for the Chilean constituent process, which is evidence of the fluid relations that exist between Spain and Chile

Trade relations between Spain and Chile, with great potential, are excellent. A reflection of this is the large presence of Spanish companies in Chile and their interest in continuing to work there. In this regard, the President of the Government of Spain stressed that this collaboration could be extended to sectors such as energy, green hydrogen, water resources, digitalisation, smart cities, cybersecurity, health, environment and infrastructure.

In the first half of 2021, Spain increased its exports to Chile by more than 33 per cent compared to the same period in 2020, with a value of almost 800 million euros. Spain imported more than €662 million from Chile, a year-on-year increase of more than 12 per cent.

Spain remains firmly committed to making progress in the negotiations on the EU-Chile Association Agreement, as Sánchez reminded Piñera during the meeting.