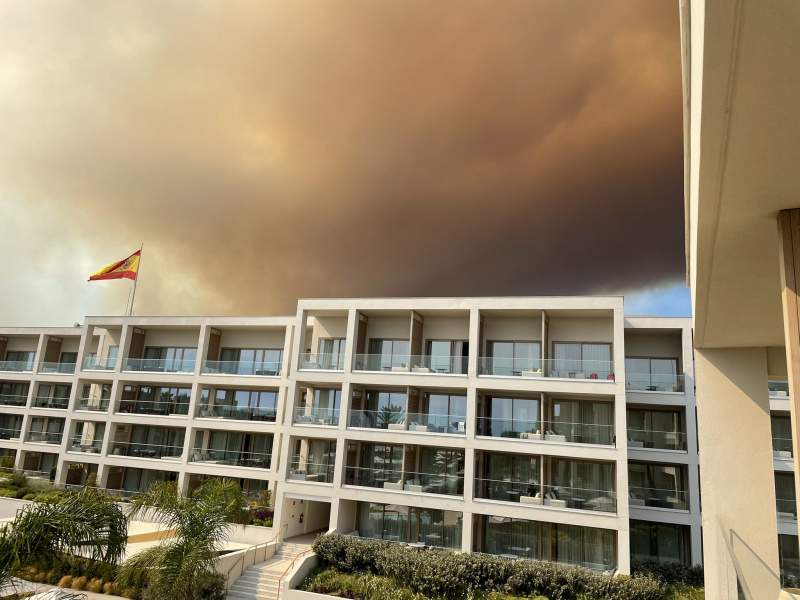 About 200 professionals, 9 heavy-duty land vehicles and 26 planes and helicopters are taking part in the operation to stabilize the wildfire in Estepona.

More than 400 people have been evacuated as about 200 professionals battle the huge blaze in Estepona, with heavy smoke reaching as far as Marbella.

Massive fire in Estepona with the smoke reaching Marbella 😱 pic.twitter.com/tUkNZtEbHS

The mayor of Estepona, Jose Maria Garcia Urbano, earlier issued a message calling on locals to stay calm. He explained that the authorities are working hard to put the fire out. He has also said that in the future they will put preventative measures in place.

At around 1pm, Victoria Herrero, from CK La Quinta senior home, confirmed to EWN that the A7 had been closed and that people in the home are a little afraid but have faith in the authorities. They have started emergency plan number one.

According to reports, ash is falling in La Quinta, and cars in the area are covered.

Early on Thursday morning, September 9, the level 1 of the Emergency Plan for Forest Fires was activated. Sadly, the fire still appears to be raging and according to reports plumes of smoke can be seen from Fuengirola which is around 40 kilometres away, and from Los pedregales and other areas too.

Many people took to Facebook to publish photos of the shocking fire and urged people to stay safe. One Facebook user commented: “Thinking about all our friends and clients in Estepona and Benahavis this morning. The fire looks dreadful and has been burning all night. Stay safe guys and gals ”.

Another Facebook user said: “That’s a really bad one. Hope everyone ok x”.

According to reports the MA-8301 that runs from Estepona and the MA-8302 from Jubrique have been closed as a precautionary measure by the Guardia civil.

It has also been reported that ash has been raining down in San Pedro.

The fire began shortly before 22:00 on Wednesday and so far the Sierra Bermeja mountain range has been affected along with other municipalities in Malaga. This includes Estepona, Jubrique and Genalguacil. The weather conditions have made the situation more serious, and so far over 400 people have been evacuated.