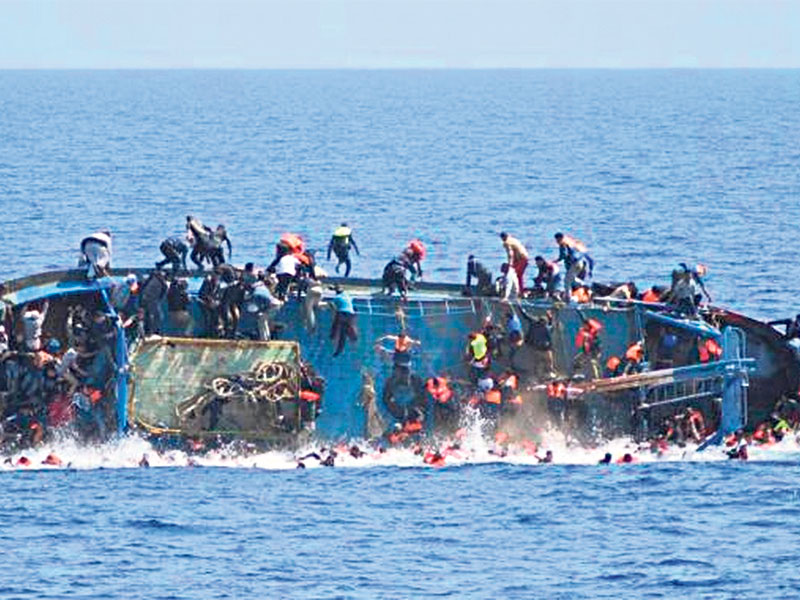 LIFE GOES ON: An endless stream of Africans arrive, if they’re lucky.

DEAR reader, we’re through August and on the home straight into cooler times.

Hopefully. Who really knows, in this interesting new weather? My partner, back in California after his USA passport got the EU thumbs down, gives nightly reports of raging fires, abandoned towns and flooding. Is this divine retribution for Trump’s climate change denial?

News that by 2050 chunks of Spanish coastline’ll be under water and the Canaries arid, due to the Trade Winds that keep us cool ‘diminishing’, can’t be blamed solely on Trump, comforting though scapegoats are.

My latest grandson’s now three weeks old. The other little dears are three and six. By 2050, I’ll be long gone, but what about them? What about all the world’s kids? Can anybody explain why political correctness andhealth & safety are obsessions, whilst we still wantonly trash the planet? We worry about perfect kids’ car seats and traffic accidents, then continue to ignore the mega-accident being imposed on their whole future well-being and planet?

Meanwhile, life goes on. The endless stream of Africans arriving, if they’re lucky, continues. The casualties are horrific. So far this year, 7,000 have made it, amongst them 2,666 minors. Ninety-six per cent of the 2,170 who didn’t make it had a watery grave. Their bodies were never recovered.

At the other extreme of the wealth scale, the Atlantic between Africa and the Canaries is in the news with the installation of a submarine Canalink cable connecting us and Morocco to mainland Spain, providing ultra-fast, fiber optic communication.

“Worldwide, there are more than a million kms of submarine cable already functioning, 3,500 of which belong to this company,” explains Canalink CEO Carlos Suarez. Tenerife’s island Cabildo and Vodafone are 50/50 owners of the new 2Africa connection

Submarine cables are apparently under ‘permanent shark attack, causing recurring damage’. Do sharks know something we don’t? Of prime concern, however, is security and protection against military or terrorist attack, given our increasing dependence on cable-connected data processing centres. An attack, or failure, could paralyse a country’s vital communication systems.

Will crews of such surveillance ships commissioned to protect our new submarine cable close their eyes as Africans drift past on small boats, I wonder?

Ending on a Covid note, check your genetic ancestry, dear readers of European ancestry. Should your OAS1-3 genes be of Neandertal haplotype, relax. You’re less susceptible to a severe reaction.

A last, and ingenuous, question: how can our species, blessed with such ingenuity and inventiveness, not trouble itself to protect its extraordinary, endangered natural environment as priority?