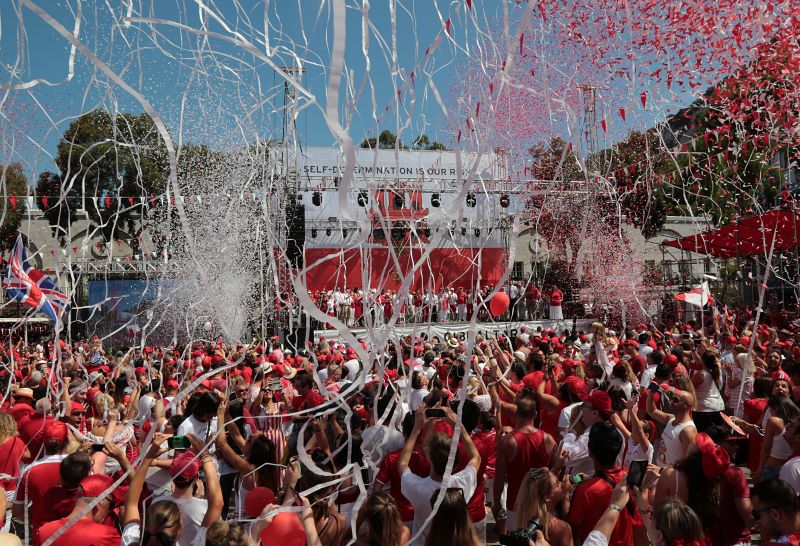 A typical scene from one of the earlier National Day celebrations Credit: Gibraltar Government

LOW KEY celebrations for Gibraltar National Day September 10 2021 due to the aftermath of the pandemic.

Traditionally, Gibraltar makes a huge show of celebrating National Day with thousands of locals and visitors teeming into Casemates Square wearing red and white to listen to speeches and enjoy musical entertainment as they celebrate their identity.

Like last year, Casemates will remain quiet as the celebrations will be pre-recorded and broadcast on GBC television and even then, there isn’t a huge amount going on, with a political rally at 12.30 (plus an expected recorded speech by Boris Johnson, where he passes on a message from the Queen to her loyal subjects in Gibraltar followed by a rock concert and some fireworks in the evening.

It rather looks as if most of Gibraltar will celebrate by raising their flags and beach umbrellas on one of the local beaches whilst they get together with friends and family.

National Day is a public holiday, one of 12 enjoyed by Gibraltarians which compares favourably to just eight in the UK and equal to Spain.

Gibraltar has been a British possession of one type or another since 1704 and the local people have in the past 60 years experienced increasing self-determination whilst still remaining part of the British family.

The turn-out for this Referendum was a staggering 96.5 per cent of all registered voters, so unlike some later Referendums elsewhere, the will of the people was quite clear.

The vote took place on September 10, 1967 and since then, that date has been celebrated as Gibraltar National Day and has become increasingly more fun each year whilst never ignoring the underlying fact that whilst Gibraltar wishes to remain good friends with its neighbours across the border, it still wishes to maintain its direct links with the UK and Her Majesty the Queen.

Every year, the Gibraltar Government is invited to speak to a United Nations Decolonisation Committee where Spain and many Latin American Countries denounce the ‘Colony of Gibraltar’.

This year at a recent UN seminar in Dominica, former Chief Minister and still member of the Government Sir Joe Bossano represented the Rock and returned saying that for the first time in 57 years, Spain did not challenge Gibraltarians’ claim to be a genuine people with their own identity.

Following on from this, current Chief Minister Fabian Picardo will say in his National Day speech that no-one other than Gibraltarians will decide the future of the Rock.

Thank you for reading ‘Low key celebrations for Gibraltar National Day September 10 2021’ and remember that all articles produced by Euro Weekly News may be accessed free of charge.