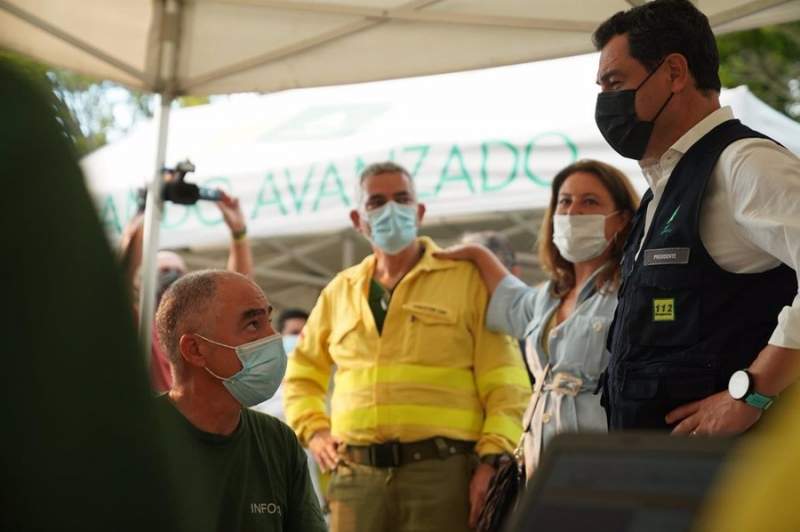 Junta de Andalucía President Juanma Moreno insists that the fire in Sierra Bermeja was arson.
The president of the Junta de Andalucía, Juanma Moreno, stated this Saturday that the fire brigade has advised him that in at least two sources of the fire in Sierra Bermeja, in the province of Malaga, the same method has been found, “two piles of litter- with a rock on top- that were lit with a lighter “, and that everything indicates that it was” intentional “- arson.
Moreno spoke to the press today, the notes are in English below as video is in Spanish.

Moreno also said that the authorities are waiting for an investigation to be carried out to confirm it definitively and insisted that “everything points to” that the fire was intentional and warned the perpetrators: “do not sleep soundly” because they (the police) are going to go after them and they WILL be found and they WILL be brought to justice.
The Andalucian firefighter organisation, Infoca, told Europa Press that it is practically “confirmed” that the fire was intentional after the discovery of these remains in the two sources of the fire.
The president’s speech.
“Everything points to the fact that this fire was started. Today the fire brigade has told us that in the two outbreaks the same method, two piles of litter with a rock on top of it, and lit with a lighter. It means that if the two methods are the same, Everything points to arson, although there will have to be an investigation, that this fire has been intentional, “according to Juanma Moreno, who has asked for the collaboration of citizens to” monitor “and when they see any suspicious activity, report it, it will be treated as anonymous, but it could help find the “criminals”.
“We are going to go for them, it may take a month, two months and a year, but we will find them,” Moreno warned the perpetrators of this fire, recalling that it was possible to locate the author of the fire in Doñana, in the province of Huelva.
“Sometimes it takes time, but we will find them. If they are listening to me, they should not sleep soundly tonight, neither tomorrow nor the day after nor next month nor in six months, because we will hunt them down and they will put them before justice”, said the president.