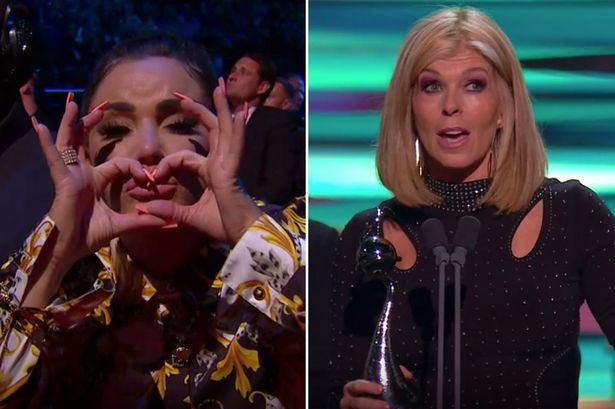 Katie Price was spotted making a sweet gesture to Kate Garraway as she lost out at the National Television Awards.

Former glamour model Katie Price was spotted showing a sweet gesture of love and support to NTA rival Kate Garraway- despite losing out on winning an award for her documentary, Harvey and Me.

Bankrupt Price looked as glamorous as ever as she attended the ritzy award ceremony at the O2 arena in London with Harvey and her sister Sophie.

Katie, 43, and her 19-year-old son Harvey had been nominated for an Authored Documentary gong alongside TV host Kate for her documentary, Finding Derek. Despite losing the coveted award, Katie held her hands up and created a heart shape with her fingers to Kate as she walked towards the stage to accept her award.

While at the event, Katie Price was knocked back by a journalist after he told her she was “too old.” She was asked to be in a video with the blue-eyed journalist Kiran Rai and she happily posed, including pouting and winking at the camera.

The 28-year-old reporter captioned the video: “When you and Katie are so drunk at the NTA. She wanted my number and said ‘I love your eyes, what’s your Instagram’.”

Kiran then claimed he told Katie: “[sic] ‘I don’t do have Instagram plus you’re too old for me’. HAHA,” and added a laughing emoji face.

It was Prices’ first appearance since her alleged assault- she was seen heading to the afterparty as soon as the awards wrapped up.

It was an emotional moment for Kate Garraway when her heart-wrenching documentary Finding Derek won the National Television Award, to a standing ovation from the O2 Arena crowd.

It was in March 2020 that Kate’s husband, former political aide Derek Draper was hospitalized with coronavirus.

After his condition took a severe turn for the worse, Derek was placed into a medically induced coma by doctors, with Kate and the couple’s children Billy and Darcy unable to see him due to lockdown restrictions.

Kate was told by medics that Derek had one of the most severe cases of Covid of any surviving patient and his struggle in hospital, as well as how Kate and family coped back at home were laid bare in ITV documentary Finding Derek.