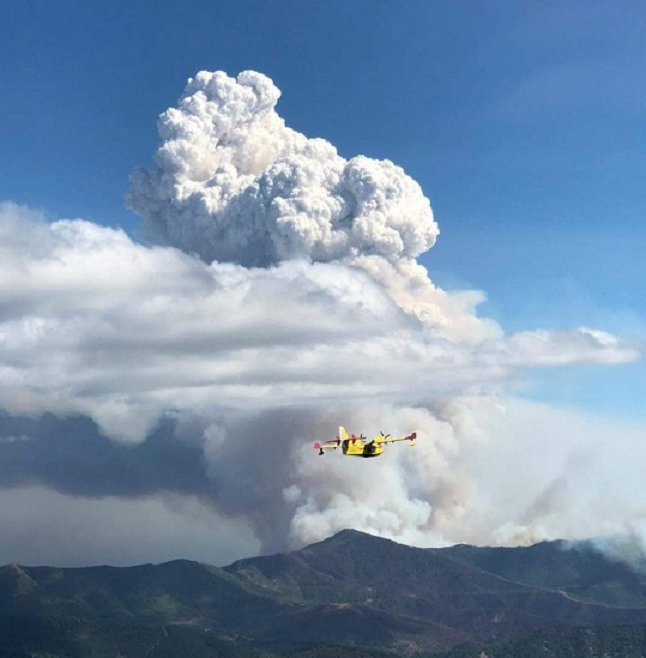 Sierra Bermeja fire stills burns as a giant ash cloud covers the complete area.
The fires in Sierra Bermeja last night continued for the third day. In 72 hours, they have destroyed more than 5,000 hectares of land and already extend over an area of 41 kilometres.


The fire has now reached grade E, the maximum level in the Infoca plan, and is being compared to the great fire on the Costa del Sol in 2012 – the most serious in the last decade in the province.
A thousand families have so far been evacuated out of their homes and the blaze has sadly claimed the life of Carlos Martínez Haro, a 44-year-old forest firefighter.
However, the capacity for devastation does not only affect the ground as large clouds of dense ash are now covering the area.
Fire fighting teams- relentless in their efforts-  carried on through the night using a drone for follow-up tasks and surveillance.
The Andalucian Forest Fire Extinction Service (Infoca) said today, Saturday, September 11, that much work has been done on the ‘right flank’ of the fire and containment has been ‘effective, but there is still a lot of work to do, who also added that the work today will be complemented by the addition of 17 aircraft.
According to the 112 emergency services,  40 people from 11 homes in the Quiñones area, south of Cuesta de Ronda in Estepona were evacuated last night as a precautionary measure.
The reason was the fall of firecrackers from the sky which are small flaming particles that end up turning into hot ashes caused by the fire.


Smoke from a large wildfire near #Estepona in Spain drifts into the Mediterranean 🔥 #SierraBermeja pic.twitter.com/uDk5FpmLZX

After the declaration of level 2 on Friday, September, 10, it was decided to reinforce the operation with two more ‘seals’ (seaplanes) from the State to the four that have already been in operation since Thursday and an additional helicopter.
In addition, two state extinction brigades with 11 troops each and another helicopter have already been requested. In total, five more air assets and 22 troops for the reinforcement to defeat the flames.
In Sierra Bermeja, 510 professionals are still working tirelessly to put an end to the fire.
Fire rain
Alberto Benitez, the mayor of Jubrique has reported that the two large clouds of smoke seen emanating from the massive Sierra Bermeja forest fire have led to the confinement of more than 1,000 people to their homes, until further notice, under the risk of a phenomenon called ‘fire rain’ that could drop out from these clouds and burn people.
According to 112 Emergencias Andalucia, there are pyrocumulus, or clouds of smoke, one over each village of Jubrique and Genalguacil, a phenomenon that usually occurs vertically, but this time they have expanded horizontally, and that poses, they have informed the mayor, a “risk of fire rain”.