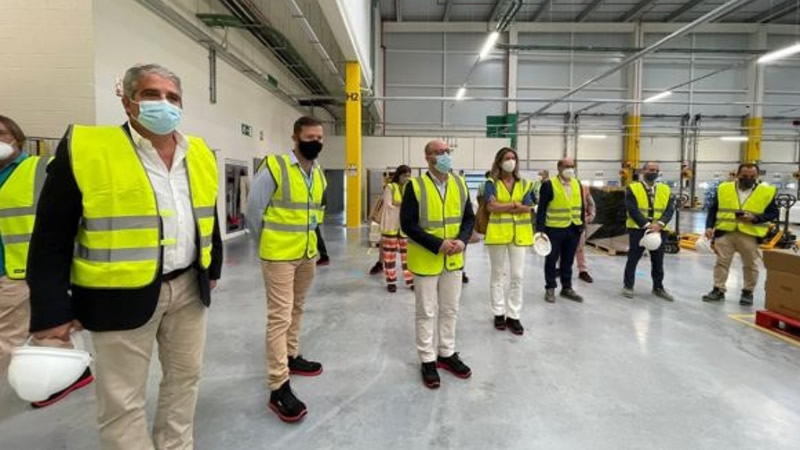 AMAZON will open its new logistics centre in the Cadiz municipality of El Puerto later this month, on a plot of more than 41,000m²

Amazon will open its new logistics centre in the Cadiz municipality of El Puerto, in late September, on a plot of more than 41,000m² of the Las Salinas Industrial Park, with a press release from El Puerto consistory saying the site is, “a key location in the expansion of the multinational by the regional and national geography, whose construction has been dizzying, even ahead of the deadlines set, with an average of 90 workers per day that increased many days to reach 160 employees, to build the plant in just nine months”.

German Beardo, the mayor of El Puerto, visited and toured the site, accompanied by Pilar Balderas, the ‘site leader’ of Amazon, inspecting inside the facilities of the warehouses that will be dedicated to logistics, packaging, and preparation of shipments that the international firm has built in the city.

On completing the tour, Mr Beardo said the site was, “now converted into one of the most important logistics facilities in Andalucia, which adds to the important Amazon network, whose most important bulwark is the speed in the delivery of goods to its customers”, with the facility housing “one of the most advanced plants, equipped with the latest technology, of one of the fastest-growing business groups dedicated to the distribution of electronic commerce”.

An investment of €6.5 million was made in the construction of this warehouse, which should generate around 120 direct jobs for locals, along with hundreds of additional positions with their delivery partners, with the El Puerto facility consisting of nine unloading docks for lorries, and 43 for delivery vehicles, plus a car park for around 500 vans.

Pilar Balderas, on behalf of the entire Amazon team, stressed that they are proud to contribute to promoting local employment, with the aim of creating quality jobs, while the director of the plant in El Puerto has explained that it will work uninterruptedly 24 hours a day.

At its highest peak, which is expected to occur around a month before Black Friday and even after Kings Day, the forecast at the Portuense plant is estimated at 67,000 packages in one night, with an average of about 100/120 workers who distribute their routes by postal codes to deliver an average of more than 100 packages on a daily basis, as the mayor concluded, “Amazon’s location in our land will be an exponential shock, not only for our city, but also for the province, making El Puerto a leading Logistics Centre throughout Andalucia”, as reported by lavozdigital.es.